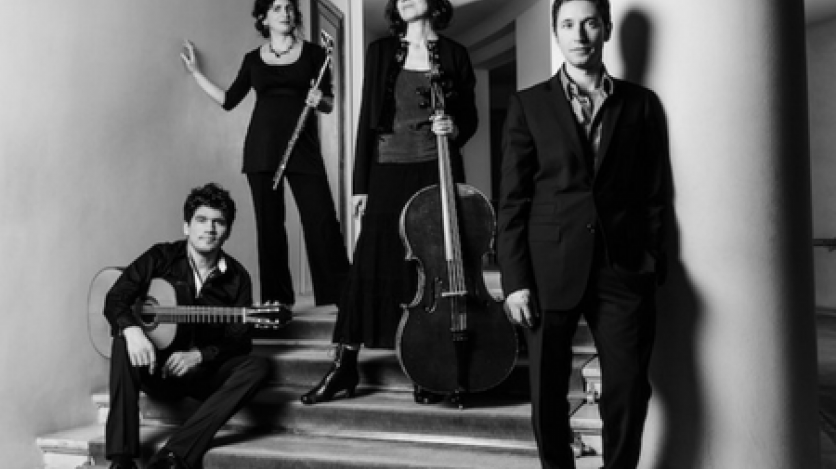 Pre-registration for this event is now closed. Admittance at the door will be on a first come, first served basis. Box office will open at 6:15 in the lobby.

Founded in 2003 by pianist Ezequiel Spucches, guitarist Pablo Márquez, and flutist Mónica Taragano, Ensemble ALMAVIVA is an instrumental ensemble that specializes in classical and contemporary repertoire from Latin America. The ensemble’s mission is three-part: to explore the richness of the musical heritage of the Americas, propose fresh interpretations of major works, and actively contribute to the creation of contemporary works through commissions of living composers; to promote the intersection of various artistic disciplines to lead audiences in discovering new works by emerging and established composers; and to inspire enthusiasm for contemporary music through a diverse range of cultural projects and workshops.

Composer Daniel D'Adamo began his music training in his native city of Buenos Aires. In 1992, he joined Philippe Manoury's composition class at the Conservatoire National Supérieur de Musique in Lyon. He completed his doctorate in musicology in Paris in 2002 and co-founded Ensemble XXI in Dijon in 2004. In 2017, he composed a series of five studies for double bass—Ombres Portées—for Florentin Ginot for Radio France's Alla Brève. He is currently working on a new piece for string quintet, commissioned by the Béla Quartet. D'Adamo's music is performed regularly throughout the world by numerous soloists and ensembles, including Ensemble Court Circuit, Les Percussions de Strasbourg, Ensemble XXI, Nouvel Ensemble Moderne, l’Instant Donné, Sillages, and Ensemble Orchestral Contemporain. He is currently a tenured professor of composition at the Conservatory of Strasbourg and the Haute École des Arts (Rhin). In 2006, he received the Boucourechliev Prize and, in 2009, the SACEM Spring Prize for his play Dream of Bells. The recording Plier/Déplier, for string quartet with electronics, received the Prix de l’Académie Charles Cros.