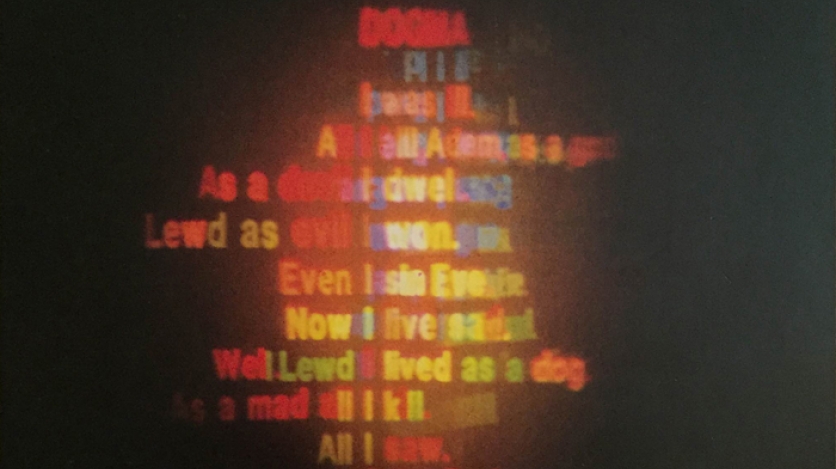 Encounter with Words: Spatial Writing through a Hologram of Darío Lancini's Poem

​Online registration is currently closed but members may arrive before the event and pick up tickets. Non-members may pay at the door. Please email jnegroni@as-coa.org with questions.
Not yet an AS Member? Join now!

In this novel event, Venezuelan poet and prose-writer Matilde Daviú will give a lecture on the poetry of her late fellow poet Darío Lancini, particularly the visual presentation of his palindrome “Dogma,” through the much vaunted hologram of German artist Dieter Jung. The artist himself will be present to discuss the process of creating his hologram of Lancini’s poem, which will be displayed during the event. This “Encounter with Words” aims to integrate visual arts and poetry, as well as to explore new ways of seeing and the use of technology in the creation and dissemination of contemporary writing and art. Co-presented with the Venezuelan American Endowment for the Arts, whose binational initiatives have supported the work of many young and emerging artists and writers through the years.

Matilde Daviú is a Venezuelan author whose fiction has been published internationally and who has taught avant-garde literature and art in Venezuela and the United States. Among her publications are the short-story collections Maithuna (1978), Barbazucar y otros relatos (1979), and El juego infinito (2005). Her work has been included in U.S., German, and Venezuelan journals and anthologies. Her signature work in art and technology, La escritura espacial a partir de un holograma, has been widely published and presented in conferences over the world. She is Director of Literature programs at the Venezuelan American Endowment for the Arts.

Dieter Jung (b. Bad Wildungen, Germany, 1941), considered one of the pioneers of, and today a master of, creative holography, studied theology, painting, graphic arts, and cinema in Berlin and Paris. Since 1965, his visual installations have been presented in numerous solo and collective exhibitions at major institutions in Germany as well as elsewhere throughout Europe, the Americas, Asia, and the Middle East. From 1985 until 1989 he worked as Research-Fellow at the Center for Advanced Visual Studies/MIT and served at the Academy of Media Arts in Cologne as a Professor for creative holography and light art from 1990 until 2007. In 2010, he became a Member of the Academic Board of Advisors (now a think tank) of the ZERO Foundation in Düsseldorf, and in 2011 he joined the International György Kepes Society in Hungary. He lives and works in Berlin.

Darío Lancini (b. Caracas, 1938; d. Caracas, 2010) was a poet and painter who, along with other poets and artists, such as Rafael Cadenas and Jacobo Borges, participated in the literary groups El Techo de la Ballena and Tabla Redonda. After a period of exile in Poland, he returned to Venezuela, where he published Oír a Darío (1975), which brought together thirty of his palindromes, ranging from one sentence to a 750-word text based on Surrealist poet Alfred Jarry’s play Ubu Roi—the largest palindrome ever written. Lancini earned the praise of authors including Julio Cortázar and Augusto Monterroso, earning renown as one of the major exponents of the palindrome form