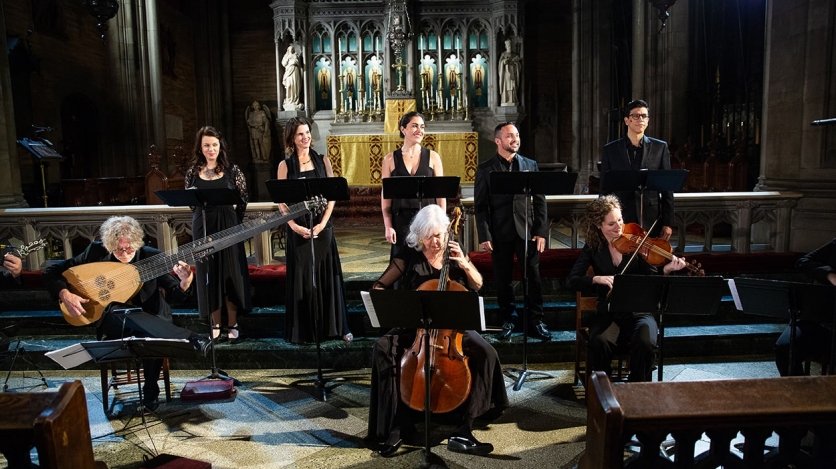 An Empire of Silver and Gold

Daniel Zuluaga leads Corónica, a collective of musicians from Canada, Colombia, Cuba, Argentina, and the US, in a program of vocal and instrumental pieces from 18th-century Latin America.

Our online registration is now CLOSED for this event, but tickets are still available through the Five Boroughs Music Festival website (the Non-Member Registration tab) and at the door.

Admission: FREE for AS and YPA Members, and all students with ID; $40 VIP Priority seating, $25 General Admission, $15 seniors. All non-member ticketing will be handled by the Five Boroughs Music Festival.

Daniel Zuluaga leads Corónica, a collective of musicians from Canada, Colombia, Cuba, Argentina and the US, in a program he created of vocal and instrumental pieces from 18th-century Latin American manuscript sources, including works by Juan de Araujo, Andrés Flores, Joseph de Torres, and Juan Franzés Yribarren. The idea of an empire full of gold, silver, and other treasures was one of the most powerful fantasies that the New World imprinted upon the imagination of sixteenth- and seventeenth-century European conquerors and explorers. As vast material and human riches were plundered, colonizers also planted some precious and perhaps unintended seeds. The one that may have flourished most vigorously was music, which was an effective tool for evangelizing the indigenous and African slave populations. The wonders of polyphony and the teaching of music bore fruits in Colonial Latin America that were nothing short of extraordinary. The geographic immensity of this region, from what is today the Southern United States to Patagonia, offered the most fertile soil for such fruit. The program "An Empire of Silver and Gold," deemed by the San Diego Union Tribune as a “treasure with its own shimmer and gleam,” is built around works selected, edited, and reconstructed by Zuluaga from some of the most important musical archives in the Americas—from cathedrals in Bolivia, Colombia, Guatemala, Mexico, and Peru, among others—woven together to provide an informal overview, a snapshot, of the wonders of music in Colonial Latin America.

Two-time Juno-award nominee (Canadian Academy of Recording Arts and Sciences), Colombian lutenist and guitarist Daniel Zuluaga has been praised for his “rhythmic vitality and fine sense of color” (Washington Post), and for his “great inventiveness” as an accompanist (San Francisco Classical Voice). Based in Montréal, he performs regularly with leading orchestras in Canada and the United States, including Philharmonia Baroque Orchestra, Les Violons du Roy, L’Harmonie des Saisons, San Diego Bach Collegium, Baroque Chamber Orchestra of Colorado, and Ensemble Caprice. An avid researcher, Zuluaga has published articles on the early history of the guitar and has won awards for musicological studies, including a Fulbright fellowship. Zuluaga is visiting faculty at the Universidad Central in Bogotá, Colombia, and holds a PhD in musicology from the University of Southern California (2014). He is currently preparing a Baroque guitar recording on the music of Henry François de Gallot.

The ensemble Corónica was born out of a deep interest in historical portraits woven into narrative storytelling, and the desire for a conversation about the complex historical realities and the beauty of music in Colonial Latin America. A collective of musicians from Canada, Colombia, Cuba, and the US, the ensemble takes its name from Felipe Guamán Poma de Ayala’s 1615 massive chronicle entitled El primer nueva corónica i buen gobierno, a testimony of events past and guide to social fairness in the viceroyalty of Peru. The glowing reviews of the ensemble’s premiere performances, as a project sponsored by the Bach Collegium San Diego, praised the ensemble’s joyous, ebullient, and infectious approach, and its ability to achieve “something difficult and rare: transparency without thinness and a substantive sonic presence [...] without obscuring individual lines.” (San Diego Union Tribune)