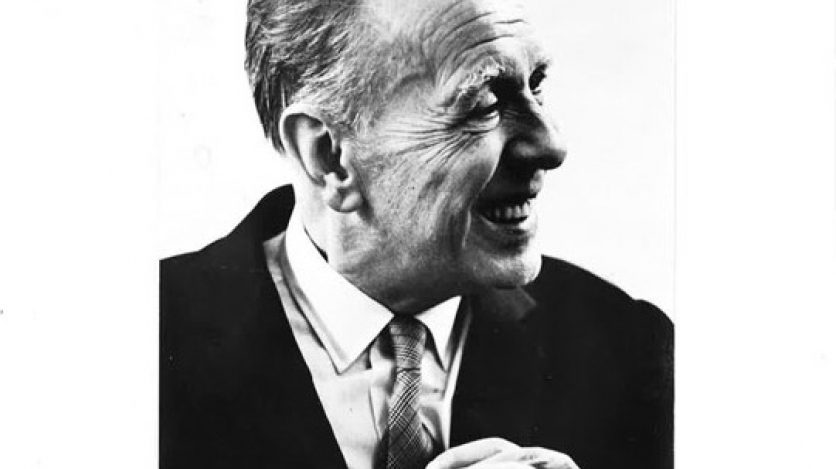 A panel of translators will discuss the work of Argentine author Jorge Luis Borges and translation.

Online registration for tonight’s program is currently closed. Members may still arrive prior to the event and pick up their tickets, and non-members may pay at the door. Admission: FREE for AS Members; $10.00 for non-members. For questions, email LiteratureDepartment@as-coa.org.

Note: Due to renovations in our building, attendees should use the side entrance to our building on 68th Street. Staffers will be on hand outside to guide you if you cannot locate the entrance. Tonight’s program is not wheelchair accessible. We’re very sorry about the inconvenience.

Americas Society will host a special panel on the great Argentine author Jorge Luis Borges, bringing together writers and translators Efraín Kristal, Suzanne Jill Levine, Alfred Mac Adam, and Alastair Reid, who will engage in a discussion on Borges in translation and Borges the translator, as well as the author’s importance to world literature. This event reprises the panel held at the Americas Society in 1983 with the author himself, Mac Adam, Reid, and Alexander Coleman. It precedes the April 17 opening of Xul Solar and Jorge Luis Borges: The Art of Friendship, an exhibition at the Americas Society Art Gallery. This program will be held in English.

Jorge Luis Borges (b. 1899, Buenos Aires; d. Geneva, 1986), universally considered one of Latin America’s and the world’s greatest twentieth century writers, distinguished himself as a poet, short-story writer, and essayist. He was born into an established Argentine family, was educated in Buenos Aires and Geneva, and read widely in Spanish, French, German, Latin, and English. As a young man while living in Spain, he became involved with the Ultraist avant-garde literary group, which sought to revolutionize Spanish poetry. After returning to Buenos Aires, he became the center of a revival in Argentinian literature, publishing his work in the literary journal Sur, founded by Victoria Ocampo, and collaborating with Adolfo Bioy-Casares. Among Borges’s numerous publications are Historia universal de la infamia (1935), Ficciones (1944), and El Aleph (1949). Stories such as “The Aleph,” “The Garden of Forking Paths,” “Pierre Menard, Author of the Quixote,” and “The Library of Babel” are considered literary classics and emblematic of human inquiry and the human condition. Borges received many literary prizes throughout his career, including the Prix International and the Jerusalem Prize as well as honorary degrees from Columbia and Oxford University. He served as director of the National Library in Buenos Aires from 1955 to 1973. Later in life, he slowly went blind but continued writing, reading, traveling, and lecturing. His last book, Atlas, was written with María Kodama, whom he married a month before his death. Borges’s writing has been widely translated. In addition to his original prose and poetry, he translated the work of numerous authors including Kafka, Poe, Whitman, and Virginia Woolf. Borges was honored at a dinner and public program at Americas Society, then known as the Center for Inter-American Relations, in the spring of 1983.

Efraín Kristal is professor and chair of UCLA’s Department of Comparative Literature. Most recently, he edited Jorge Luis Borges’s Poems of the Night, in the Borges Penguin Classic Series edited by Suzanne Jill Levine (see below). Kristal is also the author of Invisible Work:  Borges and Translation (2002), Temptation of the Word: The Novels of Mario Vargas Llosa (1998) and, with John King, The Cambridge Companion to Mario Vargas Llosa (2012).

Suzanne Jill Levine, director of Translation Studies at the University of California at Santa Barbara, is an eminent translator, scholar, and critic of Latin American literature. Her books include Manuel Puig and the Spider Woman: His Life and Fictions (2000) and The Subversive Scribe: Translating Latin American Fiction (1991), reissued recently by Dalkey Archive Press. Levine is general editor of Penguin Classics’ five-volume series of the works of Jorge Luis Borges, which was published in 2010. She edited the volume On Writing in that series.

Alfred Mac Adam is professor of Spanish-American literature at Barnard College/Columbia University and the former editor of Review: Literature and Arts of the Americas. A specialist in twentieth-century Latin American literature, he is the author of The Dreams of Reason (1977) and an acclaimed translator of works of fiction by Alejo Carpentier, Julio Cortázar, José Donoso, Carlos Fuentes, and Mario Vargas Llosa. Most recently he translated Cortázar’s Final Exam (2008). He edited the volume On Argentina in the Borges Penguin Classics series.

Alastair Reid is the renowned translator of Jorge Luis Borges and Pablo Neruda, among other iconic Latin American writers. His translations of Borges include The Gold of the Tigers (1977) and selections in the Viking Penguin Jorge Luis Borges:  Selected Poems (1999), edited by the late Alexander Coleman; those of Neruda include Extravagaria (1974) and On the Blue Shore of Silence (2003). Since the 1950s, he has been a travelling correspondent for The New Yorker.  Reid has published over 40 books, including translations as well as original poetry, essays, and prose chronicles, among them Passwords (1963), Whereabouts (1987), and An Alastair Reid Reader (1994). His own work has been widely translated.