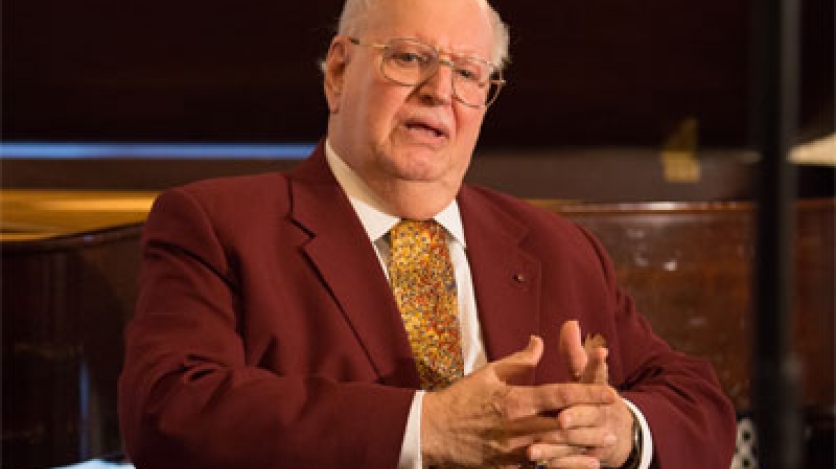 On June 29, Music of the Americas hosted a conversation with Cuban composer Aurelio de la Vega and a performance of his music by pianist Marta Marchena and soprano Anne Marie Ketchum.

Americas Society hosted a conversation with distinguished Cuban composer Aurelio de la Vega and a performance of his music by pianist Marta Marchena and soprano Anne Marie Ketchum. During this event the composer received the Ignacio Cervantes Award.

Born November 28, 1925, in Havana, composer Aurelio de la Vega was trained in diplomacy in his native city, he later served as cultural attaché at the Cuban Consulate in Los Angeles. After studying with Ernest Toch in California (1947- 48), de la Vega toured the United States as lecturer (1952-59) and settled in Los Angeles in 1959, where he has been very active as a composer, lecturer, and professor. His list of compositions includes symphonic pieces, chamber music, piano, solo instruments with tape, song cycles, cantatas, ballet music, guitar and electronic music. His works have been performed by major orchestras, ensembles, prominent soloists, and singers in cities around the world. De la Vega has lectured extensively in Cuba, the United States, Mexico, Puerto Rico, Venezuela, Brazil, Canada, Spain, Argentina and Chile, primarily on contemporary music and on the art of Latin America. De la Vega is the recipient of numerous prizes, commissions, awards, and distinctions, including the Friedheim Award of the Kennedy Center for the performing Arts, and a Latin Grammy nomination in 2008, as well as honors and decorations from various governments for his contributions to North American and Latin American music. De la Vega's intense, virtuosic, lyric-dramatic and highly expressive musical vocabulary can be heard in long series of works. The composer has combined pan-tonality, atonality, serial procedures, open forms, and electronic elements with a highly structured musical lexicon often underlined by sharp and strong rhythmic patterns. In the words of musicologist George Skapski, "De la Vega's style is characterized by an angular treatment of the voices, passionate arch forms, vigorous motoric cells and an intense preoccupation with instrumental color."

Martha Marchena has been inspiring audiences worldwide with her unique repertoire, captivating performances and innovative discography for decades. Born in Cuba, she has performed as a soloist with orchestras and chamber music ensembles worldwide. Noted for the originality of her programming, critics have praised the intensity of her interpretations as well as the emotional impact she brings to audiences.