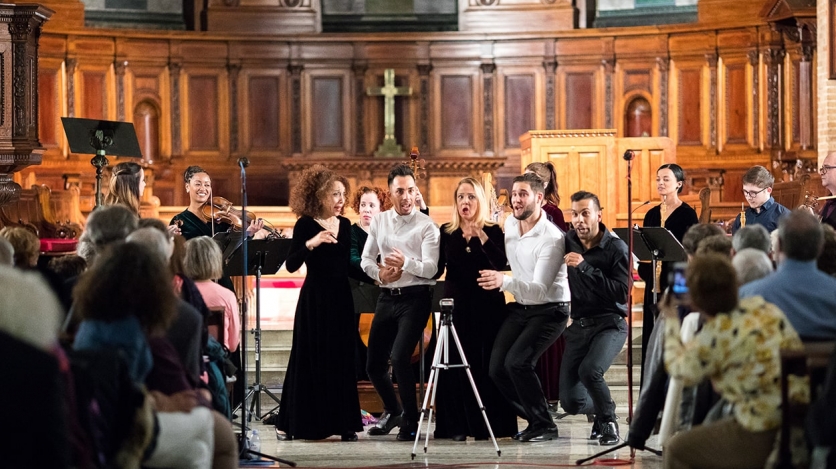 The Cuban early music group returns with a program of Latin American baroque music that explores resonances of Africa in the Americas.

On March 15, we will host this concert in person, and tickets are free. Please register here to reserve your seat.

Not yet a member? Learn how to become an Americas Society member.

Ars Longa returns to Music of the Americas with a concert that draws on their 2013 CD “Gulumbá Gulumbé. Resonancias de África en el Nuevo Mundo,” which highlights the African presence in baroque music from the New World. The program, based on research by Guatemalan musicologist Omar Morales Abril, includes several villancicos negros, musical pieces intended primarily for Christmas, as well as poetry, recited by members of the ensemble.

Ars Longa de La Habana, founded in Havana in 1994 by Teresa Paz and Aland López, is dedicated to the performance of Latin American and Cuban colonial music. Over the past 20 years, Ars Longa has performed regularly at the most prestigious music venues of the island and has given concerts and participated in international festivals in Spain, Italy, France, Sweden, Austria, Croatia, Slovenia, Venezuela, Mexico, and Ecuador. In addition to promoting the interpretation of early music in Cuba, Ars Longa hosts the annual international Esteban Salas Early Music Festival in Havana, which brings musicians and ensembles from around the world for concerts and masterclasses. The ensemble has released several CDs that have won recognition and prizes in Europe from Diapason, Le Monde de la Musique, Télérama, and Classica. They have performed on the GEMAS series twice in New York to packed houses.

Soprano Teresa Paz, Ars Longa's co-founder and director, holds a master's degree in Spanish music from the University of Valladolid in Spain and serves as the director of the concert venue at the Church of San Francisco of Paula in Havana, which regularly presents early music concerts. In 1994, she and Aland López formed the early music group Ars Longa, the first of its kind in Cuba. She is also the founder and director of the annual Esteban Salas Early Music Festival, which brings early music players from around the world. It serves as a meeting place in Cuba that through workshops and conferences assists the development of early music performance and interpretation. Teresa was the first to initiate academic plans to teach early music in Cuba. To put her informed historical interpretation into practice, she established the Baroque Orchestra of the Escuela Nacional de Música, Havana. She has attended workshops in early music singing and interpretation with such international specialists as Josep Cabré, Evelyn Tubb, and Claudio Abbado. Teresa has been honored internationally for her recording projects of unknown works by Cuban and other Latin American composers.

This concert is part of GEMAS, a project of Americas Society and Gotham Early Music Scene devoted to early music of the Americas, and is a co-presentation with Five Boroughs Music Festival.

The arrival in the colonies of large numbers of enslaved African people in the 16th century coincided with a Golden Age of Spanish arts. Poets and musicians frequently adopted phrases, themes, and rhythms from folk culture, making use of the new dialects (called guineos or hablas de negros) created by the African and Afro-descendant population, which are variations of Spanish or Portuguese that incorporate new words and phonemes derived from the slaves’ ancestral languages. The musical genre that represented this trend most prominently was the villancico religioso (religious carol). These compositions were customarily introduced during the Matins services for important festivities of the liturgical calendar. Many of these compositions were set to texts using various guineos. These African-inspired performances included chanting and dances accompanied by drums. Ars Longa’s program draws together these resonances of African cultures captured by the ears and artistic sensibility of poets and composers of villancicos de negros. The compositions represent the community’s rhythms, skills, celebrations, and vitality.