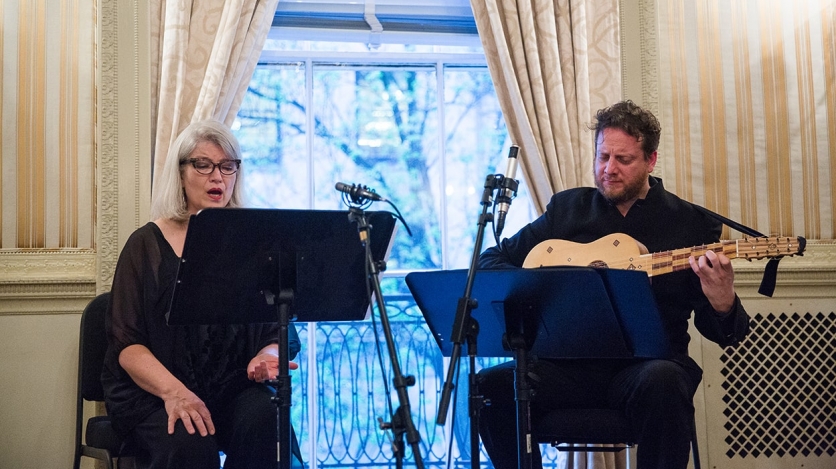 Argentine lutenist/vihuelist Ariel Abramovich and soprano María Cristina Kiehr, who form Armonía Concertada, imagine a lute and voice program drawn from existing polyphonic music, a common practice in the Renaissance. The concert features works by Juan Vásquez, Adrian Willaert, Jacques Arcadelt, and Mateo Flecha. The duo initially focused on Spanish and Italian music of the sixteenth century. Both musicians studied at the Schola Cantorum Basel in Switzerland. They have performed throughout Latin America and Spain, most recently at the Capilla del Antiguo Seminario (Baeza), as part of the 10th Festival de Música Antigua de Úbeda y Baeza (Spain).

Abramovich will perform on a six-string vihuela de mano built by Francisco Hervás (Granada) in 2014.

A native of Buenos Aires, Ariel Abramovich began studying guitar in his teens and later discovered his passion for jazz and popular Latin American music under the tutelage of Norberto Pedreira, Quique Sinesi, and Miguel de Olaso, who exposed him to Renaissance music. While still a teenager, he devoted himself exclusively to the repertoire for lute and sixteenth century vihuela, under the tutelage of Argentine experts Dolores Costoyas and Eduardo Egüez. In 1996 he moved to Switzerland to study with Hopkinson Smith at the Schola Cantorum Basel. In 1998 he founded the duo El Courtesano with alto Jose Hernandez-Pastor, which is dedicated to the extensive repertoire of Spanish vihuela. With this duo he has presented numerous concerts internationally for the last 15 years, and has become an expert on the repertoire for this instrument. In 2008 Abramovich embarked upon a duo project with leading British early music tenor John Potter, revisiting English lute song from the late 16th to the early seventeenth century. Over the last few years, they have presented numerous performances throughout Europe with a diverse array of programs, culminating in a recording of their own arrangements of Renaissance vocal polyphony (ECM, 2011). Since relocating to Seville in 2000, Abramovich has dedicated his focus to these collaborative projects: he has presented programs with French lutenist Eugène Ferré; Scandinavian soprano Anna Maria Friman; Argentine lutenists Evangelina Mascardi, Monica Pustilnik, and Dolores Costoyas; and with flutist and German director Michael Form, among others.

Argentine soprano María Cristina Kiehr studied the violin as a child, and, at the age of 17, discovered her delicate, flexible soprano and her love of baroque repertoire, which led to a European education at Schola Cantorum Basel, where she studied with René Jacobs and Eva Krasnai. Kiehr currently calls Switzerland her home, where she lives with her husband, cellist Orlando Theuler. She frequently performs internationally, and is held as a leading Baroque soloist, collaborating with such conductors as René Jacobs, Jordi Savall, Nikolaus Harnoncourt, Philippe Herreweghe, Frans Brüggen, Gustav Leonhardt, and Konrad Junghänel, and with such ensembles as Concerto Vocale Leipzig, La Fenice, Cantus Cölln, Ensemble Vocal Européen, Hespèrion XX, Elyma, Nederlands Kamerkoor, Concerto Köln, and Ensemble 415. She cofounded ensembles La Colombina, Daedalus, and Concerto Soave. She has been consistently committed to the integration of the voice and instruments.