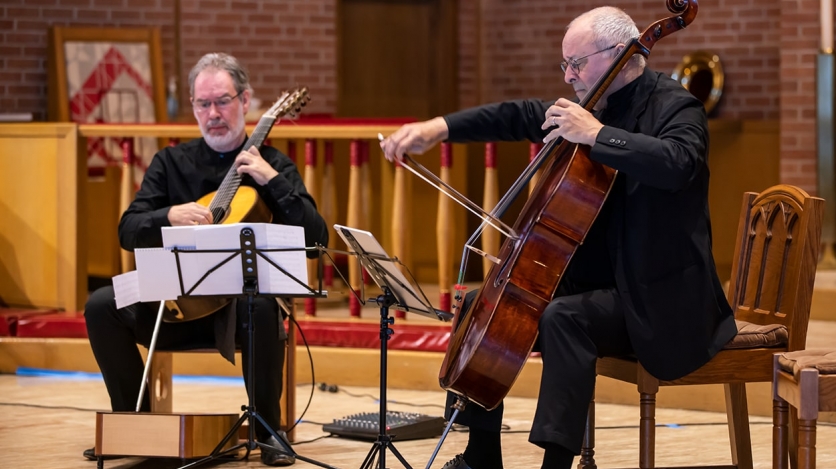 Paul Galbraith and Antonio Meneses. (Image courtesy of the artists)

The two extraordinary soloists present a program of Brazilian and European chamber music.

Paul Galbraith and Antonio Meneses. (Image courtesy of the artists)

On November 3, we will host this concert in person, and tickets are free. Please email Gina Portale to reserve your seat.
Video of the concert will be released at a later date. Remember to follow us to watch this and other exciting performances. All guests will be required to provide proof of vaccination and wear masks.

Antonio Meneses was the cellist of the legendary Beaux Arts Trio from 1998 until their final concert in 2008. He won the first prize and gold medal at the 1982 Tchaikovsky Competition in Moscow and the first prize at the 1977 International ARD Competition in Munich. Meneses is a frequent guest at the world’s major music festivals, including the Festival Pablo Casals (Puerto Rico), Mostly Mozart Festival (New York), Salzburg, Lucerne, the Vienna Festwochen and Berlin Festwochen, and the Prague Spring Festival. He has collaborated with the Emerson Quartet, Anne Sophie Mutter and Maria João Pires. He has performed with most of the world’s leading orchestras, including the Berlin Philharmonic, London Symphony, BBC Symphony, Concertgebouw, Vienna Symphony, Czech Philharmonic, the Moscow and St. Petersburg Philharmonics, the Israel Philharmonic, Orchestre de la Suisse Romande, the Bayerische Rundfunk Orchestra, New York Philharmonic, National Symphony Orchestra (Washington DC). Among the conductors with whom he has collaborated are Herbert von Karajan, Riccardo Muti, Mariss Jansons, Claudio Abbado, André Previn, Semyon Bychkov, Herbert Blomstedt, Yuri Temirkanov, Kurt Sanderling, Neeme Järvi, Mstislav Rostropovich, Vladimir Spivakov, and Riccardo Chailly. Antonio Meneses plays a Matteo Goffriller cello made in Venice ca. 1710. A native of Recife, Brazil, Meneses now lives in Basel, Switzerland.

Paul Galbraith’s recording of the Complete Bach Violin Sonatas and Partitas was nominated for a Grammy Award for Best Solo Instrumental Album. When he won the Silver Medal at the Segovia International Guitar Competition at the age of only 17, Andrés Segovia, who was present, called his playing “magnificent.” This award helped launch an international career including engagements with some of the leading orchestras of Britain and Europe, including the Royal Philharmonic, Chamber Orchestra of Europe, BBC Philharmonic, Scottish Symphony Orchestra, English Chamber Orchestra, BBC Scottish Orchestra, and was featured at the Bach Festivals of Los Angeles, Philadelphia, Denver, and Carmel. Galbraith’s 2016–2017 season included his third performance on Lincoln Center’s “Great Performances” series and at the 92nd Street Y in New York, as well as festivals in Vienna, Paris, Spain, Italy, China, and South Korea. Past tours have brought him to Boston, Washington DC, Baltimore, Buffalo, Atlanta, Miami, St. Louis, Milwaukee, Cincinnati, Cleveland, San Diego, Portland, and Seattle, and, internationally, to the UK, Spain, Portugal, the Netherlands, Denmark, Norway, Finland, Germany, Russia, Italy, Hungary, Poland, Israel, and Turkey. He toured the United States as a soloist with the Moscow Chamber Orchestra, performed in Prague’s Dvořák Hall with the National Chamber Orchestra of Chile, and collaborated with the Shanghai and St. Petersburg Quartets. Galbraith’s playing position (first revealed at the Edinburgh Festival in 1989) and his guitar’s design are considered groundbreaking developments in the history of the instrument. The guitar is supported by an endpin, similar to that of a cello, which rests on a wooden resonance box. Its two extra strings, one high and one low, increase the instrument’s range to an unprecedented extent. A native of Scotland and a long-time resident of Brazil, Paul Galbraith now resides in Basel, Switzerland.

The Fall 2022 Music program is also supported, in part, by public funds from the New York City Department of Cultural Affairs in partnership with the City Council, by the New York State Council on the Arts with the support of the Office of the Governor and the New York State Legislature, the Howard Gilman Foundation, and New Music USA’s Organizational Development Fund in 2022-23.