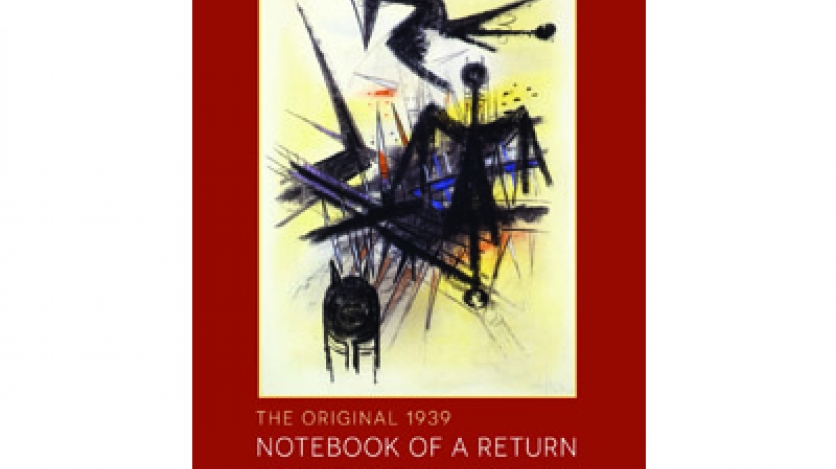 Aimé Césaire: The Original 1939 Notebook of a Return to the Native Land

Clayton Eshleman and A. James Arnold will read from their translation of Notebook of a Return to the Native Land, the 1939 text by acclaimed Martinician poet Aimé Césaire.

Online registration for tonight’s program is closed. Members may arrive prior to the event and pick up their tickets, and non-members may pay at the door.  Email jnegroni@as-coa.org if you have any questions.

Admission: FREE for AS Members; $10.00 per program for non-members.

Translators Clayton Eshleman and A. James Arnold will read from their translation of the original 1939 text of the great Martinican poet’s masterpiece, Cahier d’un retour au pays natal, published by Wesleyan University Press as The Original 1939 Notebook of a Return to the Native Land. Aimé Césaire (1913-2008) is considered one of the most important twentieth-century French-language poets and a towering figure in world literature. Clayton Eshleman is the foremost translator of Antonin Artaud, Aimé Césaire, and César Vallejo. A. James Arnold is Emeritus Professor of French at the University of Virginia and the lead editor of the genetic edition of Césaire’s literary works in French. This program will be held in English with bilingual readings. A book signing will follow in collaboration with La Casa Azul Bookstore.

"This book re-presents one of the most significant of all pieces of postcolonial writing in its original version. The scholarship is impeccable; the result of two careers dedicated to Césaire."
—Martin Munro, author of Shaping and Reshaping the Caribbean: The Work of Aimé Césaire and René Depestre

"A remarkable and essential contribution to the scholarship on Aimé Césaire, unquestionably the most important and influential black poet to have written in French. This is the first time that non-specialists will have access to the original published version of this monument of francophone letters, making it one of the most important publications in francophone studies of recent date."
—Nick Nesbitt, author of Voicing Memory: History and Subjectivity in French Caribbean Literature

Aimé Césaire, Martinique’s most renowned literary figure, coined the term négritude to celebrate the African presence in Caribbean literature and culture. Césaire defined it as "the simple recognition of the fact that one is black, the acceptance of this fact and of our destiny as blacks, of our history and culture," in the author’s Discours sur le colonialisme (1955; Discourse on Colonialism). Among his books of poetry are his masterwork Cahier d’un retour au pays natal (1939; The Original 1939 Notebook of a Return to the Native Land, trans. Clayton Eshleman and A. James Arnold, 2013); as well as Soleil cou coupé (1948; Solar Throat Slashed, trans. Eshleman and Arnold, 2011); Les Armes Miraculeuses (1946; Miraculous Arms); Corps Perdu (1950; Lost Bodies), with illustrations by Pablo Picasso; and Aimé Césaire: The Collected Poetry (1983; trans. by Eshleman and Annette Smith). He was also a playwright whose plays include Une Tempete Tempête pour théâtre nègre (1968; A Tempest [. . . ] for a Black Theatre, 2002), based on Shakespeare's play; Une Saison Au Congo (1966; A Season in the Congo); and La Tragédie du Roi Christophe (1963; The Tragedy of King Christophe). Césaire was the recipient of the International Nâzim Hikmet Poetry Award, the second winner in its history. He served as mayor of Fort-de-France as a member of the Communist Party, and later quit the party to establish his Parti Progressiste Martiniquais. He was deeply involved in the struggle for French West Indian rights and served as the deputy to the French National Assembly. He retired from politics in 1993. He died in 2008 in Martinique.
Clayton Eshleman is a renowned translator and poet. His fourteen collections of translations include Watchfiends & Rack Screams,by Antonin Artaud (1995); The Complete Poetry of César Vallejo, with a foreword by Mario Vargas Llosa (2007); Solar Throat Slashed, by Aimé Césaire, co-translated with A. James Arnold (2011); and Aimé Césaire’s The Original 1939 Notebook of a Return to the Native Land (2013), also co-translated with Arnold. His translation of José Antonio Mazzotti’s Sakra Boccata (2013) includes a foreword by Raúl Zurita. His forthcoming publications include Penetralia, a new poetry collection (2014) and The Collected Poetry of Clayton Eshleman (2015), both from Black Widow Press. Eshleman has received a National Book Award and the Harold Morton Landon Translation Award (Academy of American Poets). He is Professor Emeritus at Eastern Michigan University.
A. James Arnold has specialized in comparative Caribbean literature since the mid-1980s. He edited the three-volume History of Literature in the Caribbean (1994-2001) and founded both the CARAF Books and New World Studies series at the University of Virginia Press. He is currently the lead editor of Aimé Césaire’s literary works, to be published in Paris by CNRS Éditions. His co-translation with Clayton Eshleman of Césaire’s collection Solar Throat Slashed was published by Wesleyan University Press in 2011. He and Eshleman also co-translated Césaire’s The Original 1939 Notebook of a Return to the Native Land (Wesleyan, 2013).