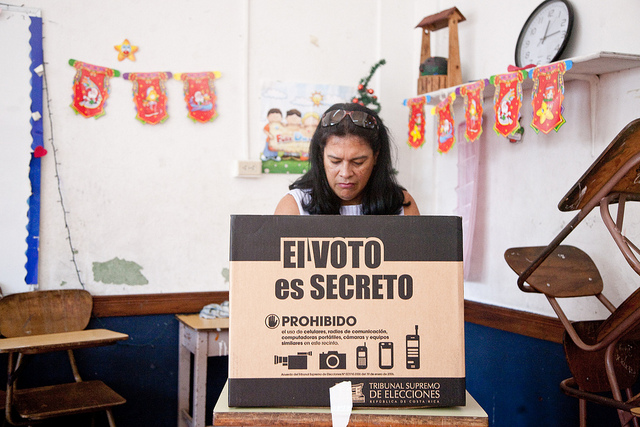 For the first time, Costa Rica and El Salvador will allow emigrants to vote in their presidential elections, both taking place on February 2. AS/COA Online looks at the countries’ new expatriate voting laws and what have been the changes and challenges of adopting these measures.

Costa Rica: The country’s revised 2009 electoral code permits overseas citizens to vote in presidential elections and national referenda, but not congressional members. With an estimated 300,000 Costa Ricans living abroad, the government will enable polling centers in 52 consulates and an electronic voting system in 31 countries. The consulates in New York (2,657 voters), Los Angeles (1,487 voters), and Miami (1,153 voters) have the largest number of registered voters. Roughly 120,000 Costa Ricans live in the United States alone.

In order to vote, overseas residents must be 18 years of age or older, have a national identification card, and register at a consulate prior to the elections. It’s thought that roughly 12,600 expats are registered to vote this year—a small number compared to how many live abroad.

In the event of an April 6 runoff, expats can go to their prior assigned voting posts to resubmit their ballots. In addition to dealing with travel costs and long distances, this year’s adverse weather conditions in Canada and northern United States could impede many Costa Ricans from making it to some polling centers, reports La Nación. Suffrage is obligatory, but failing to vote is not punishable.

El Salvador: In January 2013, the country passed the Special Law for the Exercise of Voting from Abroad in Presidential Elections, which allows expat residents to submit a ballot by mail. To register, voters must be at least 18 years old, possess a valid identification, and have a physical address abroad.

The new electoral law could afford emigrants—particularly in the United States—greater political clout, given their large contributions to El Salvador’s economy through remittances, which represent 16.5 percent of the Central American country’s GDP. According to the Central Bank, Salvadorans sent almost $4 billion home last year—a 1.5 percent increase from 2012. Around 3 million Salvadorans live outside the country, of which 2.5 million live in the United States. With over 400,000 Salvadoran residents, Los Angeles, California is home to the largest expat population.

But only a few weeks ahead of the vote, the electoral tribunal reported delays of at least 4,000 electoral packages that have not yet been mailed to recipients in the United States. Other residents faced issues mailing votes from postal offices in Canada. Out of the 250,000 expatriates expected to vote this year, only 10,000 registered. La Prensa Grafica reported that, as of January 23, the electoral agency received over 1,800 expat votes.

"The more Maduro can keep [the opposition] on the back of their feet, the more space he has to implement his own policy preferences," said AS/COA'... Read More