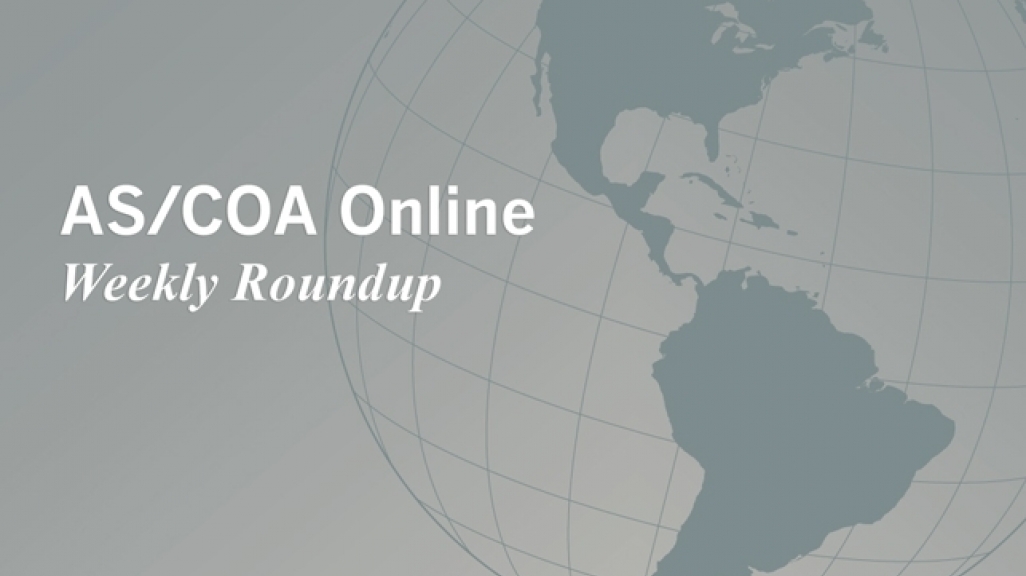 Mexico scores an A rating from Moody's, Brazil launches a new cash transfer program, and Haiti's president heads to Washington.

This week, Semana revealed a new wiretapping scandal in Colombia in which military intelligence spied on communications of government negotiators involved in the country's peace process, as well as political figures tied to the talks with the Revolutionary Armed Forces of Colombia (FARC). President Juan Manuel Santos initially called for an investigation, saying the operation was "unacceptable." However, he later backtracked, saying the surveillance was legal. El Colombiano reports that an unnamed source said that powerful retired military leaders are behind the wiretapping, as they seek to pressure Santos to "change the rules" of the peace process, or to derail the peace talks altogether.

Colombia and Venezuela Hold Bilateral Talks on the Border

Foreign Minister of Colombia María Ángela Holguín and her Venezuelan counterpart Elías Jaua met Wednesday in the Venezuelan border state of Zulia to create a plan to combat contraband smuggling between the two countries. This week, Venezuelan authorities recovered 1,000 tons of food being smuggled on the black market from Colombia. Jaua proposed that one approach to reduce smuggling and currency speculation is for Colombians living in Venezuela to send remittances in Colombian pesos rather than in dollars.

Reuters reports that Brazilian intelligence is covertly monitoring the emails and social media of the country's Black Bloc groups ahead of this year's World Cup. The Black Blocs, so named for the way they dress, originally began protesting in Europe and emerged in Brazil during the June 2013 demonstrations. Some members of these groups have clashed with the police during protests and stand accused of vandalism during the demonstrations. Officials say they are targeting violent groups and not the Brazilian public at large.

The Washington Post reports on a new Brazilian government program that offers workers making up to $300 a month a chance to enjoy cultural events and materials. The rechargeable card provides $20 a month—whether it's an outing to a museum, a play, or even buying a new book. Culture Minister Marta Suplicy said that no other country in the world is doing this type of initiative, and she hopes it will be "revolutionary" in Brazil.

Moody's Gives Mexico an A Grade

On Wednesday, Moody's gave Mexico an A grade sovereign rating, making the country only the second one in Latin America after Chile to garner an A rating. Mexico's rating went from Baa1 to A3 with a stable outlook and Moody's credited reforms ushered through by President Enrique Peña Nieto as the reason for the upgrade. "This is a stamp of approval but the reforms have to deliver growth and they have to deliver investment," Nomura Securities Strategist Benito Berber told Reuters. He predicted that Standard & Poor's and Fitch Ratings will give Mexico an upgrade in the last quarter of 2014 or first quarter of next year.

Mexico's Constitution at 97: Time for a New One?

As Mexico marked the ninety-seventh anniversary of its Constitution this week, ADNPolítico asked constitutional law experts if it's time for a new one. The document has seen 573 changes since 1917, with 80 percent of its articles experiencing modifications—some multiple times. "Article 73 has suffered 69 changes," noted the report. Miguel Carbonell, an expert at a legal research institute of the National Autonomous University of Mexico (UNAM), recommends a new Magna Carta "because we would have an opportunity to rethink what we want as a country." Francisco Burgoa, a constitutional expert at UNAM's law school, describes the Constitution as "patched" with regulations and should instead be a central document from which regulations are based.

In El Salvador, the ruling Farabundo Martí National Liberation Front (FMLN)'s candidate Salvador Sánchez Cerén received 49 percent—just shy of the 50 percent needed to avoid the March 9 runoff. Sánchez will square off against the Nationalist Republican Alliance’s Norman Quijano of who won 39 percent of the vote. Latin America political analyst James Bosworth writes that the results indicate "a vote of confidence and approval" of the current FMLN presidential administration.

Learn more about the election results in an AS/COA blog post.

This week, Guatemala's Constitutional Court ruled that, based on a technicality, Attorney General Claudia Paz y Paz must step down in May—seven months before her term ends. On February 6, the country's legislature met to nominate a replacement, but failed to reach a quorum. Paz y Paz has worked on high-profile cases in a bid to reduce impunity, including the genocide case against former military ruler General Efraín Ríos Montt. She has also worked with the UN's International Commission against Impunity in Guatemala, which said numerous joint investigations might not be completed as a result of the ruling. Paz y Paz—who appealed the decision—told El Periódico: "Those who have been affected by the advancement of justice are in a hurry for me to leave office."

A Wrench in the Plans for Panama Canal Construction

The future of the Panama Canal expansion remains up in the air, as talks between the Spanish-led consortium and the Panamanian government fell through on February 4. The breakdown in negotiations centers on determining who will foot the $1.6 billion needed to finish the project. An estimated 10,000 local jobs are at risk. In January, President Ricardo Martinelli said that Panama would finish the project by 2015 "no matter what happens, rain, thunder, or lightning." The consortium denies halting construction despite the breakdown in talks.

Citizens of Colombia and Peru will soon be free to move throughout the 26 Schengen countries without a visa, reports La República. While the European Union (EU) parliament ratified the decision on February 4, it has yet to specify when the policy will take effect. At the very least, ratification is a necessary "green light" to initiate the legislative process of implementing the decision, said the EU Ambassador to Colombia María Antonia van Gool.

The presidents of Chile, Colombia, Mexico, and Peru will meet for the economic bloc's eighth summit on February 9 and 10 in Cartagena, Colombia. The agenda includes signing the group's commercial protocol, which would eliminate tariffs on 92 percent of trade between the four countries.

New AQ: Sustainability in Cities across the Americas

AQ's new edition will be launched in New York this coming February 13 at the AS/COA, with a debate on what lies ahead for NAFTA. Watch the webcast and share your comments and questions via @ASCOA and #NAFTAat20 on Twitter.

A new environmental report ranks Chile as the top country in Latin America on environmental performance including air quality, water and sanitation access, and wastewater treatment. The 2014 Environmental Performance Index by the Yale Center for Environmental Law & Policy looked at 178 countries. The study found that Argentina, Uruguay, and Venezuela have the best air quality in Latin America; Uruguay also ranked highest for water and sanitation access. Over the past decade, El Salvador, Peru, and Uruguay improved the most, the report showed.

Bolivian President Evo Morales met with his Peruvian counterpart Ollanta Humala, on January 31 to discuss the construction of a port in Ilo, Peru that would link both countries and expand trade. The mega-port would eventually connect Bolivia, Brazil, Chile, and Peru over nearly 3,000 miles. However, the plan—first conceived by Morales and former Peruvian President Alan García—remains under debate in Peru’s Congress.

On January 31, for the first time, a journalist was sanctioned based on Ecuador's controversial communications law, which went into effect last year. The government's Superintendent on Information and Communication ordered journalist Xavier Bonilla to print a correction on February 5 after the newspaper El Universo printed a December 28 cartoon that depicted the police searching the house of a journalist and activist. Bonilla's new cartoon drawing entitled "Rectification" shows a similar scene, however, this time the police officers arrive bearing a bouquet of flowers.

Using data from the UN and the World Bank, The Guardian published an interactive data visualization to illustrate women's rights all over the world. The visualization includes 19 countries in Latin America and the Caribbean, and users can see what types of laws are in place to protect women's rights in each. While many countries in the region have legislation on domestic violence, they vary more widely on laws involving harassment.

In the Huffington Post, Cuban blogger Yoani Sánchez discusses a phenomenon involving smartphone use in Cuba. "In order to ease the limitations of living in the 'Island of the Disconnected,' local users prefer [apps] that work without access to the Internet," she writes. The top ten most popular Android apps include a flashlight, a tool to get free Wifi, a version of Wikipedia, a photo editor, and an app that sends SMS messages.

This week, Haitian President Michel Martelly made an official visit to Washington for a series of meetings with legislators, U.S. Secretary of State John Kerry, and U.S. President Barack Obama. One of the top agenda items included political gridlock in Haiti due to repeated postponement of senatorial and municipal elections. "We will continue to stand by Haitian democracy, Haitian leadership and the Haitian people in this slow and steady progress that needs to take place," Obama said. In his remarks before their meeting, Kerry noted: "[E]lections are now on the horizon, which could for the first time provide the filling out of all of the electoral positions to Haiti."

Dominican and Haitian officials resumed bilateral talks this week, discussing immigration, trade, security, and the environment. One of the top issues is a September court ruling that revoked citizenship of anyone born to undocumented immigrants in the Dominican Republic after 1929—largely impacting Haitians and those of Haitian descent. Now, President Danilo Medina plans to introduce a bill to resolve the citizenship issue, which will be introduced in Congress on February 27.