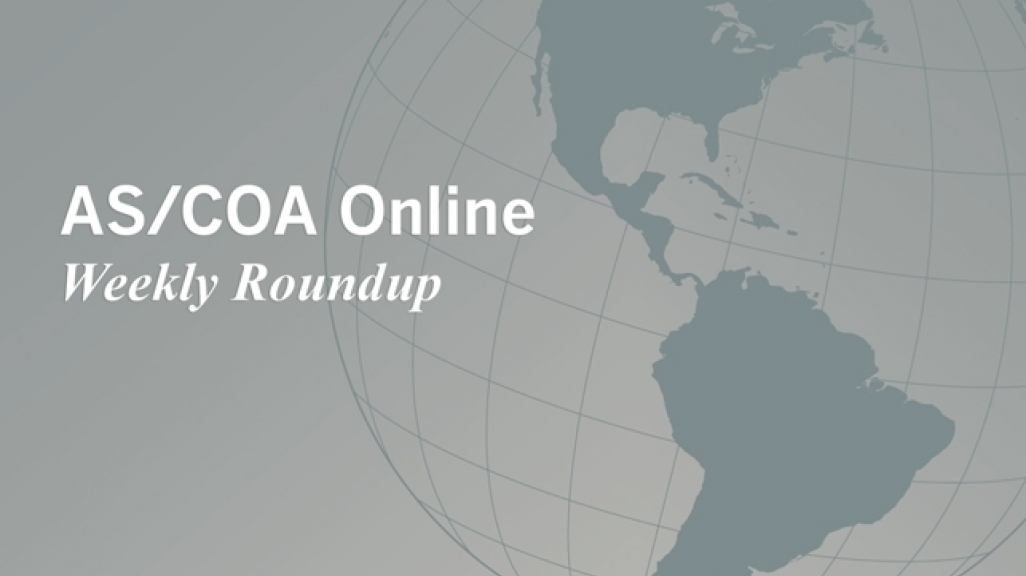 After a Battle to Keep His Seat, Mayor Ousted in Colombia’s Capital

On March 19, Colombian President Juan Manuel Santos signed an order to remove Bogota Mayor Gustavo Petro from office. In December 2013, Inspector General Alejandro Ordoñez ruled that Petro would lose his seat, saying the mayor made an unconstitutional move by replacing private garbage collectors with a public-sector service. Petro fought the decision in the courts, and this week, the Inter-American Commission on Human Rights (IACHR) issued a decision to suspend his ouster. But Santos justified his decision to go ahead with the removal, saying Colombian law should take precedence. In response to Petro’s removal, the entire Bogota city cabinet resigned in protest. La Silla Vacía published an evaluation of Petro’s time in office, ranging from a lower infant mortality rate to the unreached goal of building 70,000 new homes.

After signing the removal order, Santos appointed Labor Minister Rafael Pardo Rueda as interim mayor. El Tiempo reports that a new mayoral election will take place in May, close to the May 25 presidential vote.

Venezuela’s protests continued this week as two opposition mayors were arrested in connection with the demonstrations. On March 19, San Cristobal Mayor Daniel Ceballos was arrested by intelligence agents on charges of “rebellion and conspiracy” for facilitating violence in the city where the protests originated. The same day, the Supreme Court convicted San Diego Mayor Enzo Scarano to 10 months in prison for ignoring orders to clear barricades set up during the protests. Both mayors were sent to the same prison complex as jailed opposition figure Leopoldo López. On March 21, the OAS Permanent Council met again to discuss Venezuela, deciding to hold the session in private. The session featured remarks by opposition figure María Corina Machado.

In its debut this week, the Five Thirty Eight news site featured an analysis of Venezuela’s protests and how the country’s economy is faring in comparison to other Latin American countries. Author Dorothy Kronick notes that Bolivia, for example, used the same resource boom that Venezuela experienced to accumulate international reserves, keep inflation low, and maintain fiscal surpluses.

See what experts had to say about Venezuela at a March 17 AS/COA panel.

On March 17, Peru’s Congress voted 66 to 59 to ratify President Ollanta Humala’s new cabinet. This was the third confidence vote after the president asked for congressional approval last week. Several members of Congress abstained from voting on March 14 and alleged that First Lady Nadine Heredia was responsible for the cabinet changes, writes Reuters. The cabinet crisis came to a head in February when Humala reshuffled his cabinet for the fifth time since 2011. René Cornejo was appointed as prime minister to replace César Villanueva, who stepped down after a public dispute with the first lady.

A new study by the Cabinet of Strategic Communication, a Mexican polling firm, found that Mexico City led the country in terms of tolerance on social issues such as gay marriage, same-sex adoption, abortion, and euthanasia. On the question of medical marijuana, the capital was also among the most tolerant of the 45 cities polled. The survey also inquired about positions on autodefensas, or vigilante groups. Chilpancingo and Acupulco in Guerrero state are the most tolerant to these groups, while Los Mochis in Sinaloa is the least.

This week, Manuel Mondragón y Kalb resigned from his post as the head of Mexico's National Security Commission, citing personal reasons. Following his resignation, Interior Minister Miguel Ángel Osorio Chong wrote on Twitter that Mondragón y Kalb would work for the government in a “strategic” capacity, raising questions about why the official quit his position. Mondragón y Kalb had been tasked with setting up the country’s “gendarmerie” police force, a campaign promise of President Enrique Peña Nieto. But the plans for the force were reduced and have been delayed. Ernesto Lopez Portillo, executive director of Mexico’s Institute for Security and Democracy told The Los Angeles Times: "Officials can come and go, but what is important…is that there be accountability and transparency."

OECD Report: Life Satisfaction vs. Inequality in Chile and Mexico

Released this week, the Organization of Economic Cooperation and Development (OECD)’s Society at a Glance 2014 report looks at challenges such as unemployment and poverty over the past five years. Of the countries surveyed, Mexico has the most citizens that still feel they cannot afford food, and also has the lowest disposable household income in the OECD.  However, the country also saw the third-largest increase in life satisfaction in the OECD from 2007 to 2012. Chile saw the largest increase in life satisfaction in the OECD over the same period, but the South American country has the highest level of income inequality of countries surveyed.

On March 25, Brazil’s Chamber of Deputies is slated to vote on the country’s Internet Bill of Civil Rights, a contentious bill that underwent changes this week. Legislators agreed to drop a provision that would have required Internet companies to store data on Brazilian users inside the country—an element added to the bill last year after the U.S. National Security Agency spying revelations broke. Members of Congress are still debating one of the most polemical parts of the bill, which guarantees net neutrality; telecommunications companies oppose this provision. Agência Pública looks at the evolution of the proposal and how the bill evolved under pressure from the telecoms.

In an interview with TechCrunch, Institute for Technology and Society Director Ronaldo Lemos said that the proposal is important because at present, legal decisions about the internet fall to the courts, which rule individually at their own discretion. “That creates a lot of uncertainty for internet entrepreneurs in the country, especially startups, which cannot always afford to count on good lawyers to cope with the uncertainty in legal terms,” he said.

This week, Brazilian opposition legislators said they would launch an inquiry into possible irregularities made during a 2006 Petrobras deal to acquire a Texas-based refinery. Petrobras CEO Maria das Graças Foster was invited to testify in the Chamber of Deputies. Meanwhile, on March 20, the Federal Police arrested former Petrobras executive Paulo Roberto Costa on charges of involvement in a $4.3 billion money-laundering operation. He’s also under investigation for his involvement in Petrobras’ refinery purchase.

Assistant Secretary of State for Western Hemisphere Affairs Roberta Jacobson visited Brazil and Paraguay to meet with senior officials from March 17 to 21. In Brazil, she discussed educational opportunities, and talked trade in Paraguay, where she also focused on efforts to combat organized crime in the region.

In an interview with Brazil’s O Estado de Sao Paulo, Jacobson discussed the crisis in Venezuela and said that the United States is hoping it will not have to sanction the Andean country. During a March 20 press conference, she added that now is not the time for resuming relations with Venezuela, and that President Nicolás Maduro should focus on a dialogue among Venezuelans.

On March 20, Uruguayan magazine Busqueda reported that President José Mujica had agreed to take five detainees from Guantánamo Bay prison for at least two years. The report said U.S. President Barack Obama thanked Mujica, who confirmed that he is in talks with the U.S. government to take the former detainees, while the U.S. ambassador in Montevideo noted an agreement has yet to be reached. If Uruguay took the former Guatánamo prisoners, it would be the first South American country to do so.

On March 20, Bolivian President Evo Morales met with a delegation of U.S. legislators, saying that the Andean country would once again like to be partners. Senator Tom Harkin (D-IA) said the “very productive” meeting showed there is a commitment to improve relations. In 2008, Bolivia expelled the U.S. ambassador and officials from the Drug Enforcement Agency. Last year, Morales also shut down USAID offices.

On March 17, Bolivian President Evo Morales introduced a new mining bill that has been in the works for the past three years. The legislation includes 241 articles and will soon be up for debate in the lower house of Congress. The law aims to replace the country’s 1997 mining legislation and will also create a new state-run mining corporation.

A new report from the Wilson Center looks at the Chile’s “most significant tax reform in decades,” which was central to President Michelle Bachelet’s platform. The proposed reform plays a role in education reform, and would increase the corporate tax rate from 20 to 25 percent. It also aims to combat tax evasion. The additional 3 percent of GDP generated by the reform would be used to expand public spending on education.

On March 18, former Guatemalan President Alfonso Portillo pleaded guilty to a money laundering conspiracy and admitted to taking $2.5 million in bribes from Taiwan in exchange for recognizing the country diplomatically. “I knew at the time that what I was doing was wrong…and accept the consequences of my actions,” Portillo said before a New York federal court. Portillo was extradited to the United States in May 2013.

A new foreign investment law will be under discussion in Cuba’s legislature on March 29. The government’s decision to send the proposal to the National Assembly could be “aimed at highlighting its interest in assuring foreigners that investing in Cuba will be safe, transparent, and profitable,” writes The Miami Herald. Currently, foreign investors are limited to 49 percent ownership of joint ventures with the government.

Brazil’s Iguarapé Institute’s new interactive looks at security policies in Latin America, showing strategies, investments, and types of crimes targeted. The Institute found that since 1990, nearly two-thirds of adopted public security policies were concentrated in seven countries: Brazil, Colombia, El Salvador, Guatemala, Honduras, Mexico, and Nicaragua. However, only 7 percent of the region’s security policies include “robust” data analysis in order to evaluate the success of these strategies. The project will soon include a section to measure which policies are working.