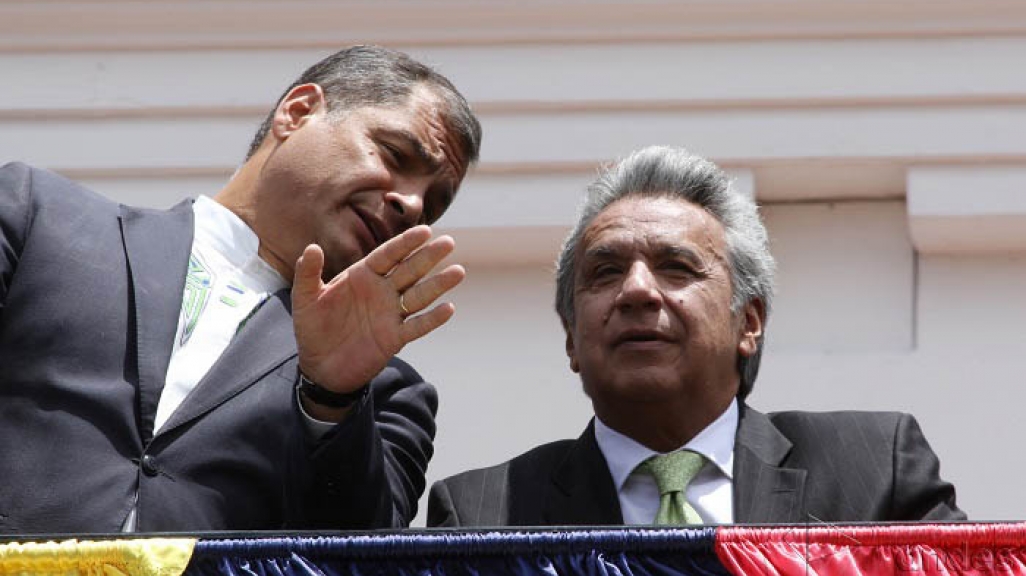 On February 4, Ecuadorans will vote on whether to reinstate term limits—and keep Rafael Correa from returning to the presidency.

On February 4, Ecuador will hold a referendum. The ballot features seven questions, ranging from reducing a national park’s acreage to preventing those accused of corruption from holding office. But the central item will be a question on whether or not presidential term limits should be reinstated into Constitution. The debate is the focal point of a bitter feud between the former President Rafael Correa—who has all but declared he wants to run for a fourth term in 2021—and his one-time vice president and successor Lenín Moreno, who backs a change that could bar Correa from the presidency for good.

What the polls say

So far, polls indicate voters will side with Moreno. In a December Cedatos poll, 67 percent of respondents expressed support for Moreno’s proposal to reinstate a two-term limit. A Perfiles de Opinion poll from the same month indicated 56 percent in favor of the measure and 29 percent against it. Meanwhile, Moreno remains popular with 70 percent approval as of late December. Correa’s support, meanwhile, fell to 26 percent in January 2018, down from the 43 percent a year earlier in the final months of his presidency.

An amendment to revert the previous amendment

Correa was voted into office in December 2006 and completed his third term in May 2017. Ecuadorans approved a new Constitution in 2008, which allowed a president to serve no more than two consecutive terms in office. In December 2015, Correa pushed a Congress-approved reform package that included a constitutional amendment to allow indefinite presidential reelection, asserting that term limits inhibited the citizens’ right to choose. At the time, Correa’s party, PAIS Alliance (Alianza PAIS, AP)—which he founded—held 100 out of 137 seats in the unicameral Congress, but some of his party members and allies were still wary about making the change to allow indefinite reelection. In order to secure their support, Correa agreed to a concession that the amendment would not go into effect until after the 2017 election, allowing him to enter the 2021 elections.

With Correa out, the party appointed Moreno to carry Correa’s legacy in the 2017 elections and keep PAIS Alliance in the presidency and the door open to a potential Correa return. Moreno won the presidency after a tight runoff election, with 51.6 percent of the vote over opponent Guillermo Lasso’s 48.8 percent. For his part, Correa moved to his wife’s native Belgium and initially pledged to spend Moreno’s term living there. But that promise turned out to be short-lived.

Correa returns to Ecuador to fight for his legacy

Despite being Correa’s handpicked candidate, Moreno took a sharp turn from the ex-president’s policies upon entering office in May 2017. He opened an investigation into the large public debts accrued during Correa’s administration, cut government salaries, and launched a campaign to overturn a controversial media law Correa passed. The changes infuriated Correa, who called his one-time protégé a “traitor” and “wolf in sheep’s clothing.” In September, the ex-president stated that if Moreno continued to shift PAIS Alliance’s platform “and destroy what has been achieved…I will have to return as a candidate.”

Moreno initially brought the question of the legality of indefinite reelection to Ecuador’s Constitutional Court for interpretation on October 2. The Court, however, declined to rule on the matter. At least seven of the nine judges joined the court during Correa’s administration. After waiting well over the constitutionally stipulated 20 days for a response without getting one, on November 29 Moreno redirected the matter to the National Electoral Council, which declared on December 2 there would be a referendum and set the date for February 4.

Correa has declared the referendum a coup. And, despite his earlier pledge, returned from Europe to Ecuador in November  with a promise to “retake” PAIS Alliance from Moreno, and he even tried to decree that Moreno was no longer the head of the party. The attempt backfired, the National Electoral Council would not recognize the declaration, and the move created rifts deep enough that on January 16, Correa left PAIS Alliance to establish a new party, the Citizens’ Revolution, the same name he uses to describe his socialist movement.