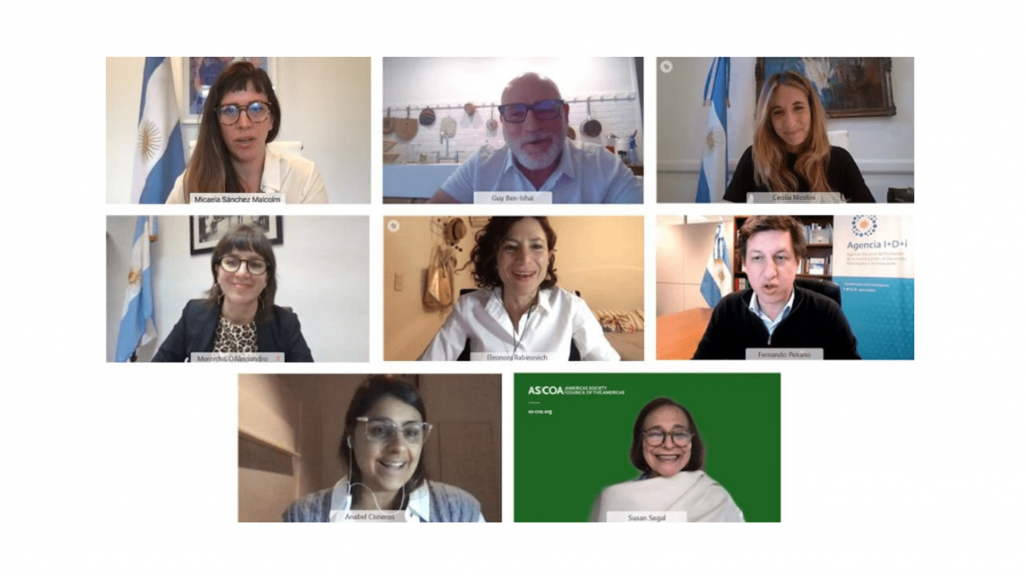 Members of Alberto Fernández’s cabinet, leading officials, and technology experts spoke with AS/COA about the challenges of digital transformation in Argentina.

On May 5, AS/COA hosted a two-part discussion with public- and private-sector experts to explore opportunities to push for digital transformation in Argentina. The first segment involved a conversation about the country’s road to economic recovery and a talk about innovation and inclusive growth in emerging economies. In the second part of the event, speakers addressed the challenges and opportunities for digital transformation and inclusion.

AS/COA’s Susan Segal opened the event by congratulating Google for its study on digital sprinters and digital transformation, and stressed that she was proud to participate in a debate that included so many women government leaders in the technology sector.

Argentina’s Secretary of Public Innovation Micaela Sánchez Malcolm spoke next, making reference to the connectivity challenges that Argentina faces due to its "geographical extension, as well as its social, productive and gender inequalities.” To address those challenges, Sánchez Malcolm highlighted the importance of cooperation between “the state, businesses, and the cooperative sector."

In an initial panel moderated by Segal, Advisor to Argentina’s President Cecilia Nicolini and Head of Economic Policy Research at Google Guy Ben-Ishai then discussed the role of technology in promoting economic recovery and initiatives to bridge the digital divide. In her remarks, Nicolini reiterated the importance of digital transformation “as an opportunity to foster economic recovery,” and highlighted the need to “increase digital inclusion and reduce the digital gender gap by focusing on regulating both in an intelligent way so that [Argentina] can continue to produce without amplifying the gap.” For his part, Ben-Ishai stressed the importance of leveraging the “democratizing power” of digital platforms and introduced the key points of The Digital Sprinters report (available in English; disponible en español) in which Google proposes initiatives to foster digital transformation in order to guarantee a sustainable and inclusive economic recovery.

Head of Government Affairs & Public Policy at Google Southern Cone Eleonora Rabinovich opened a second panel by asking the participants how technology can be used to empower vulnerable groups. Speaking on the topic of the gender gap, Director of Economy, Equality and Gender in the Economy Ministry Mercedes D’Alessandro emphasized that, “Gender gaps, which are already wide, were enhanced during the pandemic.'' She also said, “We cannot think of an economic development model without women. An economic recovery without gender perspective is only going to widen inequality gaps." Anabel Cisneros, a director of Argentina’s state-owned telecommunication company ARSAT, contributed to the conversation by sharing how the firm is playing a significant role in closing digital gaps, and remarked that part of the challenge is related to the education of girls and women.

For his part, the president of the National Agency for the Promotion of Research, Technological Development and Innovation Fernando Peirano emphasized the importance of the Knowledge Economy Law “as a regulatory framework with incentives and long-term certainties” and of the “multi-year financing law” by which the national government is committed to investing at least 1 percent of its GDP in R&D by 2032.

Participants on the two panels agreed that the discussion had been productive and that partnerships can help drive efforts to promote digital inclusion as well as economic prosperity.