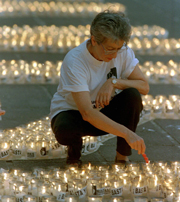 A woman lights a candle at a vigil against violence in Guatemala. (AP Photo)

With the political crisis in Honduras and Haiti’s flawed elections resolved, the Organization of American States now faces a much more intractable problem: how to respond to public safety issues that plague the Americas. The Western Hemisphere is now the most violent region in the world, with a murder rate of 14.9 per 100,000—nearly double the world average, according to a study by the OAS Inter-American Observatory on Citizen Security presented Monday. The regional body discussed citizen security over a three-day meeting beginning Sunday in San Salvador. The talks resulted in a resolution stating the principles that should guide future policy, but stopped short of recommending concrete changes.

In his speech to the OAS General Assembly Monday, Salvadoran President Mauricio Funes recommended that member nations team up to confront organized crime. “This is not a problem that can be solved solely with a national security focus,” Funes said. “The enemy we face is without a doubt transnational.” His counterparts seem to agree—at least in principle. Latin American governments have signed a smattering of agreements in recent months to better coordinate efforts to contain crime. In December 2010, the police chiefs of Peru, Chile, Argentina, and Ecuador met in Lima to exchange information on drug trafficking. In March, Colombia and Honduras strengthened an existing technical agreement aimed at suppressing the drug trade and kidnapping. Brazil agreed the same month to help Bolivia fight its cocaine traffickers. Peru and El Salvador inked a deal last month to facilitate information exchange.

But multilateral institutions have not followed suit. While the OAS General Assembly debated a declaration Monday that recommends “strengthening bilateral, subregional, regional, and international cooperation on security-related matters,” the document did not propose concrete changes to existing policy; nor did it announce plans to create a new forum to coordinate international security policy or to strengthen existing ones. A significant step in the direction of multilateral cooperation to fight transnational crime is the upcoming meeting of the System of Central American Integration (SICA, in Spanish). SICA representatives met with Insulza on Sunday to gain OAS support for a security deal that SICA will consider at its summit meeting on June 22 to 23. The specifics of the deal have yet to be announced, but it consists of 21 projects at a cost of $900 million, according to a SICA press release.

It’s not surprising that Central America is renewing the drive for international cooperation to challenge transnational crime. Over the last few years, the section of Central America known as the “Northern Triangle”—Guatemala, El Salvador, and Honduras—has experienced an outbreak of drug war violence so severe that, in the case of Guatemala, it appeared to threaten the state itself. “Definitely these groups are very strong financially. They’re strong in terms of violence. They’re strong in how they manipulate authorities,” Guatemalan President Álvaro Colom recently told NPR, referring to his country’s drug cartels. “We are doing what we can against them with our limited resources.”

El Salvador—the host of this week’s OAS meeting and the Central American country with the highest annual murder rate at 71 per 100,000—is considering some new ideas to confront drug cartels and youth gangs. One proposed law would recruit as many as 5,000 14- to 16-year-olds from gang-infested areas into obligatory civilian military service for mobilization during natural disasters. The brigades would instill military discipline, but without weapons training. To finance this and other programs, Salvadoran President Mauricio Funes proposed a “security tax” on citizens with more than $500,000 in assets. The proposal resembles a tax levied by Colombia’s Álvaro Uribe in 2007 to raise funds for his democratic security programs. Funes has secured the backing of the major political parties, including the conservative Nationalist Republican Alliance (ARENA, in Spanish) but the private sector has yet to get on board.

Even with new taxes, however, Central American leaders continue to look north to fund anti-trafficking operations, and some leaders want to see a stronger U.S. commitment. “While it’s true that there’s been cooperation with the United States, it’s been very little,” Honduran Security Minister Oscar Álvarez said Monday before the OAS General Assembly. “What they’ve given us so far is a drop in the bucket.” Compared to the $1.6 billion in anti-drug trafficking support committed to Mexico through the Merida Initiative since 2008 or the $8 billion funneled to Colombia since 1999, U.S. aid to Central America is indeed small—but it is rising fast. The United States gave the region less than $5 million per year in anti-drug trafficking funds before passing the Merida Initiative. Since 2008, however, U.S. anti-drug funding to Central America topped $400 million and U.S. Assistant Secretary of State William Brownfield pledged another $200 million during a visit to Honduras in March 2011.

Others think the United States should rethink its drug policy entirely. The Global Commission on Drug Policy, a group that counts four former Latin American presidents among its members, presented a report last week calling the drug war a failure and advocating treatment of drug abuse as a public health issue rather than a criminal justice one. The presidents of Mexico, the United States, Guatemala, and Costa Rica all rejected the report’s recommendations shortly after the Commission presented its work Thursday.