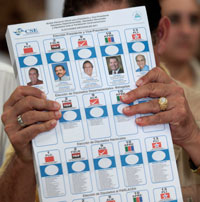 Guatemalans and Nicaraguans headed to the polls November 6. (AP Photo)

Updated November 7, 2011 - The Central American countries of Guatemala and Nicaragua held presidential elections on November 6. The Guatemalan vote involved a runoff after no candidate won the necessary majority in September’s election. As expected, Otto Pérez Molina, a former general who vows to take an iron fist approach to Guatemala's rising crime. In Nicaragua, former Marxist guerrilla and current President Daniel Ortega also won reelection, though questions surrounded the legality of his candidacy. AS/COA Online takes a look at both elections.

Guatemalans headed to the polls on November 6 to vote in a runoff between retired Army General Otto Pérez Molina of the Patriotic Party (PP) and Congressman and wealth businessman Manuel Baldizón of the Renewed Democratic Freedom (Líder) party. With nearly all votes counted, Pérez Molina won 53.76 percent of the vote against Baldizón's 46.24 percent. Pérez Molina lost in the second round of the 2007 vote to current president Álvaro Colom of the National Unity of Hope (UNE) party; since 1986, Guatemalans have elected the candidate who lost the last election. Now the retired general will take the helm in January 2012 to govern a country where violent crime remains an ongoing concern.

Security was one of the central issues in the election. Guatemala has one of the highest murder rates in the world  and struggles to combat numerous organized crime groups, as the International Crisis Group reports. As in the last election, Pérez Molina took a get-tough stance on violent crime and drug trafficking, known as a mano dura (iron first) approach. With a military career from 1973 to 2000, he rose through the ranks to become general during Guatemala’s brutal 36-year civil war, and critics have sought to connect him to crimes committed during that period. In July, an indigenous group accused him of participating in human rights abuses during the 1990s. Pérez Molina defended himself by denying the unverified accusations and stressed his role in the 1996 Peace Accords. But Baldizón also stirred controversy: he allegedly offered bribes to fellow congressmen to join his political party, and stands accused of having ties to organized crime in his home state of Peten.

But while violence stands as a top issue for Guatemalan voters, so does the economy. At first Pérez Molina largely focused his campaign on security, but reformulated his pledges to compete with the promises of his rival. Baldizón promised to expand social programs and proposed a 5 percent tax for all Guatemalans, regardless of income. He also pledged to raise salaries, implement the death penalty, and even to qualify Guatemala for the World Cup. Pérez Molina also proposed maintaining social programs and creating a new program called “Zero Hunger” to combat infant and child malnutrition. His own tax reform centers on preventing tax evasion to expand the tax base, while he also hopes to build the economy through tourism and exports.

According to Plaza Pública, the PP’s stronghold remains in urban populations, particularly the middle and upper classes residing in high-crime areas, while Líder has tended to attract a more rural, indigenous following. With a record 69.3 percent turnout in the first round, and a recent Latinobarómetro poll showing high levels of discontent with the country’s progress, Guatemalans seem eager for change.

In Nicaragua, sitting President Daniel Ortega won 62.56 percent of the vote while his top rival, radio businessman Fabio Gadea, garnered just 30.87 percent. A former Marxist revolutionary who toppled the government in 1979 and served as president from 1985 to 1990, Ortega is a historically controversial figure and representative of the Sandinista National Liberation Front (FSLN).

Ortega owed his victory to a buoyant economy, with exports doubling and foreign investment quintupling since he assumed office in 2007. In addition, social reforms subsidized with the help of oil imports from President Hugo Chávez’s Venezuela have helped alleviate poverty and the effects of the global crisis in the hemisphere's second-poorest country. Social programs distributed 5,000 land titles to poor Nicaraguans, and 100,000 families benefited from anti-hunger measures. The president enjoys an approval rating of around 55 percent.

However, Ortega’s candidacy may have been illegal. The Nicaraguan Constitution bars presidents from reelection, but a Supreme Court packed with Sandinista judges invalidated the prohibition in a controversial 2009 ruling. As Mary Anastasia O’Grady of The Wall Street Journal points out: “Only Congress has the authority to lift that prohibition.” Ortega also extended the term of political ally Roberto Rivas, president of Nicaragua’s Supreme Electoral Council—the organization that will count the votes—by special decree last year. Writes Tim Rogers, quoted in the Tico Times: “This could mark a real turning point in Nicaragua’s fragile democracy, in that here’s essentially a candidate whom the opposition calls illegal, running in an electoral system controlled by his party.”

Accusations of corruption also mar Ortega’s rule and the election process. The Pan American Post points to problems with the electoral rolls and voters who did not receive their voter identification cards, which are confirmed by local press.  McClatchy points to the limited role observers were permitted to play. These issues are the subject of a press statement by the U.S. State Department, which urged the government to “ensure that the campaign and the elections will be free of intimidation, violence and harassment of Nicaraguan voters.”

"In the broad sweep of history, Bolsonaro is arguably not an aberration but a return to normalcy," writes AS/COA's Brian Winter in Foreign... Read More