Remarks: The State of Regional Democracy

In a speech to the Pan-American Association of Philadelphia, AS/COA's Eric Farnsworth reflects on the state of democracy in Latin America.

Keynote Remarks to the Pan-American Association of Philadelphia

Vice President of Americas Society/Council of the Americas
Eric Farnsworth

Good afternoon. Thank you, Romy [Diaz], for that really kind introduction. I really appreciate the invitation to join all of you for this important conversation, which in my view we need to be having these days, on the state of democracy in the Americas. Ab [Lechter], your and Romy’s leadership, and the entire membership of the organization, is having a meaningful impact on the issues, and I both acknowledge and appreciate the work you do as we join together today to celebrate your 81st annual membership meeting. That’s a long time. Congratulations, and may you have 81 more years of success and still more after that.

Your vision of increasing understanding and cooperation among the peoples of the Americas—which I fully share—is more important now than ever before, and the Pan-American Association has literally been at the forefront of these issues since your founding in 1940.

It’s difficult to follow the two Clouthier Award honorees, who are doing important and meaningful work in the greater Philadelphia community. Of course, it’s also difficult to follow such impressive speakers at this podium as my friends Tom Shannon, Patrick Duddy, and Francisco [Pacho] Santos, all of whom have spoken here recently, I understand. Each has done and continues to work on behalf of the peoples of the Americas, and I am honored that you have placed me within their company.

I’m also pleased to be back in Philadelphia, the cradle of our own democracy. But more to the point, Philadelphia’s connection with Latin America and the Caribbean is both historic and strong. Simón Bolívar, Francisco de Miranda, and others at the forefront of the battle for Latin American independence took inspiration from the ideals expressed during the Constitutional Convention. Today, the Port of Philadelphia handles a huge amount of agricultural cargo originating from Chile and Peru and elsewhere.

Perhaps more importantly, at least for my own mental health, it’s also good to be out of Washington, DC. These days, it seems, extremes drive the conversation, compromise is a four-letter word, and social media has significantly reduced our ability to get things done.

I suppose that’s what Ben Franklin was referring to when he quipped outside Independence Hall that our country would be a republic, if we can keep it. Or, in the words of another Philadelphia icon, Allen Iverson, when you are not practicing, someone else is getting better.

And I would submit to each of us, it’s time to return to practicing democracy intently across the Americas, where it is challenged and on the defensive, because other non-democracies really are getting better at promoting and solidifying an alternative governance vision.

Let me give you the bottom line first: Democracy has demonstrably lost ground in the Americas. But we can work together to restore democratic momentum, and we must.

At the first Summit of the Americas held in Miami in 1994, only one leader—Cuban dictator Fidel Castro—was uninvited. The next time the United States will host the Summit, in 2022, at least three nations—Cuba, Nicaragua, and Venezuela—will not meet basic conditions of democratic eligibility. In the 27 years between U.S.-hosted Summits, the map of regional democracies has changed, including some nations which remain democratic today but which are actively eschewing democratic norms. Fully eight countries from the hemisphere have not been invited to President Biden’s democracy summit in early December.

Covid has scrambled the issues further. Latin America has seen almost one third of Covid-related deaths worldwide despite having only 8 percent of the world’s population. As the virus continues to tear across the hemisphere, including the tourism-dependent Caribbean, it has crushed economies and exacerbated social inequalities that were already the world’s highest. And this is before Omicron even arrives.

Economically, Covid birthed Latin America’s deepest recession since records began to be kept in the early 1900s. Regional growth collapsed by over six percent in 2020 and estimates suggest that 2019 levels will not return until 2023, which was itself no great year for growth.

Millions of jobs in the formal economy have been lost, perhaps never to return. Now, one third of the total population of just over 650 million is existing in extreme poverty, not even $2 per day, according to the World Bank. Coming out of the pandemic, whenever that occurs, even well-managed economies will be stressed.

Over the longer term, the region will be impacted by the disruption of schooling with limited options to recapture lost learning. Insufficient access to quality education has long been the region’s Achilles’ heel, both on absolute and relative terms, and the burden of significant educational disruption caused by Covid continues to fall most heavily on the underclass and those threatened with renewed economic insecurity. The losses could last years.

Unsurprisingly, politics are roiled. Nobody seems to have many answers. Prior to the onset of the pandemic, the region had already seen waves of protest and discontent, some of it amplified by Cuba, Venezuela, and Russia, it must be said. The pandemic forced protesters indoors but did not address the issues.

The region lacks leadership, direction, and in some cases, self-confidence. Even the dictatorial left faces unrest. When they are given an opportunity, people are willing to question just about everything and take larger risks, on the theory that what has already been attempted has not worked so why not try something totally different?

It’s a scenario tailor-made for China, already well-established economically across the region and now, during the pandemic, looking to solidify its political position and grow its strategic influence.

The strategy is simple: provide what Latin America needs in the current moment, including vaccines and promises of infrastructure investment and financial support for ailing economies. China is in full regional pursuit, with money to dispense, few demands how nations should conduct their own affairs, and a seemingly compelling narrative of a rising China and declining West.

And even though most Latin Americans have no particular organic attraction to China, they will increasingly be tempted to tilt toward Beijing’s worldview to the extent the United States offers little competing alternative. In contrast, US messaging during the pandemic has been limited, uncoordinated, and broadly ineffective, which is why the 2022 Summit looms so large.

To regain ground, policy makers must seize the moment to lay out an ambitious yet realistic vision for the Americas. In the first instance, they need to see the Summit as an opportunity to set a new agenda for a new Americas.

But they must also see it as a significant risk; without an ambitious, actionable, attractive agenda, the region will continue its drift toward viewing the United States and China as nations to play off each other without regard for political systems and values.

As first priority, it is essential that the United States launch the Vaccinate the Americas program to prioritize procurement, delivery, and administration of Covid vaccines as widely and quickly to the region as possible. Doing so would improve public health, assist with regional economic re-opening, restore travel and family ties, and show that democracies working in concert are able to address the most pressing issues together. Democracy must deliver, it is often said, and delivery of vaccines to beat back a galloping global pandemic is a great place to begin.

But that is just the first step. Lecturing regional leaders, yet again, on corruption, or global climate change, or anything else that puts them on the defensive must be accompanied by a serious proposal for financial support and increased economic ties. That’s not to say we shouldn’t discuss these issues. But we must also have something meaningful to offer. Liquidity will be required for the region coming out of Covid, with debt forbearance and new lending, particularly as global interest rates begin to rise at some point. It won’t be easy, but without it, the region will be tempted to pursue financial support—and the greater political reliance that it will create—from Beijing.

The region will also require greater opportunities to grow its way out of economic difficulty, which export led growth through increased trade opportunities can provide. Latin American and Caribbean nations are desperate for an opportunity to bolster growth through sustainable trade relations and resilient supply chains. Only the United States has the ability to convene such an agenda.

Latin America needs help. Democracy itself is increasingly challenged unless it can deliver improving results to meet the needs of the people across the region, who are questioning everything, including political systems, values, and alliances. To address these issues, we must first diagnose them accurately, and then move with alacrity. Because if we don’t, others, namely China and other authoritarians, really are getting better at promoting their own values worldwide. And recognizing the strategic importance of the hemisphere to the United States is the right place to begin.

With thanks, again, Ab and Romy, for the opportunity to join you today, and I look forward to your questions. 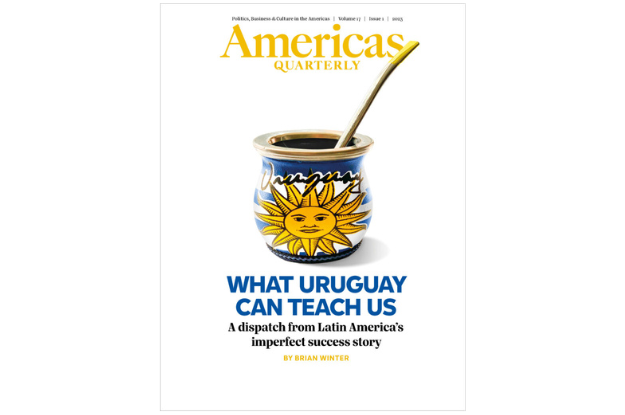