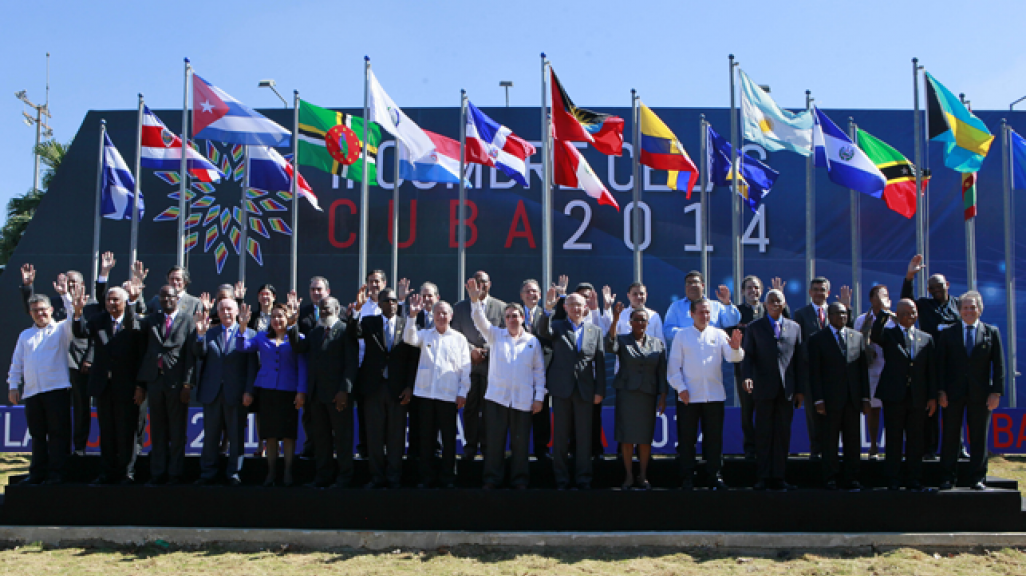 Foreign ministers meet for a CELAC summit in Cuba. (Image: CELAC in Cuba)

These groups prove effective members must surrender some degree of sovereignty for the sake of collective goals, writes AS/COA's Christopher Sabatini for ForeignAffairs.com.

Groucho Marx famously quipped that he would never want to belong to any club that would accept him as a member. The governments of Latin America seem not to share his reluctance. Over the past decade, South American and Caribbean countries have displayed an unprecedented eagerness to create multilateral organizations. But in allowing these clubs to proliferate with little regard for membership standards, governments have sacrificed quality for quantity. Many of Latin America’s new regional groups claim to share lofty goals -- from resolving conflicts to coordinating political and economic policies. But there is little reason to believe that they are capable of achieving them.

Multilateral organizations are effective when they explicitly oblige member states to surrender some degree of national sovereignty for the sake of collective goals. But the new Latin American organizations don’t include any such barriers for entry. To the extent that they provide incentives for enforcing collective norms, it is on the basis of vague notions of regional solidarity. Far from promoting meaningful international cooperation, these new organizations do little more than collectively endorse their members’ claims to national sovereignty.

To a certain degree, the organizations are a product of the region’s newfound independence. Over the past decade, the United States’ influence in the region has declined -- a result of the Iraq war and its relative economic stagnation. At the same time, China and India have emerged as important markets for the region’s exports. (China has become Argentina and Brazil’s largest export market, and the second-largest market for Chile, Peru, and Venezuela.) There is also an ideological aspect to the region’s rebalancing. Washington’s free market economic model lost favor among South Americans after it was widely (though wrongly) blamed for stagnating economies and growing income disparity. Since then, many Latin Americans have wanted to create a new global economic and diplomatic order, one in which the United States does not play a dominant role.

The first attempts to bring such an order about were led by leftists, including former Venezuelan President Hugo Chavez, then President of Cuba Fidel Castro, and future Bolivian President Evo Morales. In 2004, Chavez and Castro created an explicitly anti-American bloc called the Bolivarian Alternative of the Americas (ALBA) to promote the integration of Latin America as a counterpoint to the United States and its plans to create a free trade area of the Americas. By contrast, Brazil's more calculating diplomatic elites encouraged the creation of organizations that shared ALBA’s goals of reducing U.S. involvement in the region but were less stridently ideological, capable of attracting moderate governments as well as leftist ones, and ultimately containing their Bolivarian neighbors’ more anti-globalization vision. Brazil sponsored the creation of the Union of South American Nations (UNASUR) in 2008 and, with Mexico, the Community of Latin American and Caribbean States (CELAC) in 2011, with the stated goal of promoting regional solidarity and independence. Brasilia still largely underwrites both groups.

But these organizations did not follow the example set by other multilateral arrangements -- whether economic (North American Free Trade Agreement), security-focused (NATO), or diplomatic (United Nations) -- of requiring member states to subordinate some aspect of national sovereignty. The founding documents of both CELAC and UNASUR assert a collective desire to cooperate and describe various regional political ideals without offering any institutional mechanisms to enforce or promote them. For example, in its founding document, UNASUR invokes the “region’s shared history [of fighting] for the emancipation and unity of South America.” CELAC’s founding document mentions the South American independence leader Simon Bolivar and calls on each member to “build freely and peacefully its own political and economic system ... with the sovereign mandate of its people.” These are nice sentiments, but they do not, on their own, have any political force.

It should not come as a surprise, then, that these new regional groupings have proved ineffective. They are understaffed and underresourced, and have few tangible accomplishments to their name. UNASUR has four different bodies, though only one of them -- the secretariat based on Quito, Ecuador -- has a permanent presence. At last count, it had only around 24 staff members. Otherwise, CELAC and UNASUR are little more than a series of roving summits for presidents and foreign ministers: CELAC has sponsored seven such meetings, and UNASUR has held two. The summits have occasionally produced genuinely important declarations of solidarity and helped resolve regional conflicts and pronounced in defense of democratic institutions as it did in September 2010, when police officers allegedly attempted a coup in Ecuador against President Rafael Correa. But more often, these summits have featured moments of empty symbolism, such as UNASUR’s indignant official statement in 2013, after European governments, acting on Washington’s request, grounded Morales’ plane in Vienna, falsely suspecting him of transporting the former U.S. intelligence analyst Edward Snowden.

If CELAC and UNASUR were just talk shops, they would be harmless. But by emphasizing national sovereignty as a bulwark against U.S. hegemony, these organizations are also undermining long-standing norms governing human rights and democracy. To take one seemingly esoteric but important example: after CELAC’s summit earlier this year in Havana, the assembled presidents from across the region issued a statement endorsing “the inalienable right of every State to choose its political, economic, social, and cultural system.” To put it mildly, this is not a conventional reading of international law (or even political philosophy dating back centuries): states have generally not been understood to be capable of bearing any rights at all, much less “inalienable” ones.

The debate over this issue is more than academic. It has allowed South American countries to flout previously accepted political standards that took decades to establish. For instance, the efforts organized by UNASUR to monitor regional elections don’t rest on any independent authority: UNASUR's observers don't claim to be upholding objective standards but, rather, to be “accompanying” the local electoral authority in the process of electing a new government.

This has made it impossible for UNASUR to act as a neutral arbiter in disputed elections. When UNASUR representatives arrived in Venezuela in April 2013 to observe the country's presidential election, they believed it was their obligation to support the government's National Electoral Council, although there was evidence that it had been favoring one of the candidates, Nicolás Maduro, Chavez’s hand-picked successor. When the opposition cried foul after Maduro was declared the winner, citing an uneven playing field prior to the election and a false tabulation after it, the UNASUR observers lacked both the technical capacity and the political credibility to address potentially legitimate concerns.

In the months after the election, CELAC and UNASUR both kept silent about Venezuela’s rapidly deteriorating human rights situation, which included the arrest of opposition leader Leopoldo Lopez on trumped-up charges of inciting violence. UNASUR’s mediation efforts, led by Brazil, Chile, Colombia, and Ecuador, failed not only to resolve the political paralysis and violence in Venezuela, they also gave cover to the Maduro government to continue to physically attack and vilify its opponents, which deepened the crisis.

By refusing to acknowledge that member states had a moral and legal responsibility to respect human rights, these organizations are weakening the region's democratic norms -- norms that the region's previous multilateral groups had tried to uphold. For all its many flaws, the Organization of American States (OAS), founded in 1948, had by the early 1990s finally established an effective consensus to meaningfully protect democratic norms -- long a stated goal of the organization but often honored more in the breach than in practice. From monitoring the elections that helped create peace in war-torn Central America in the 1990s to making a stand against the authoritarian governments of the Dominican Republic in 1995 and Peru in 2000, when it organized collective denunciations of clearly stolen elections, the OAS proved that it was not afraid to stand up to recalcitrant governments when they violated basic political standards. Unfortunately, the new regional organizations, lacking the requisite legal authority and political power, don't follow this precedent. Quite the opposite: by explicitly endorsing the sovereignty of the state, they have eroded individual rights and international norms.

Fortunately, not all of South America's recently created international organizations are the same. The exception is the Pacific Alliance, which includes Chile, Colombia, Mexico, and Peru (and will soon include Costa Rica). In contrast to CELAC and UNASUR, it has had a focused mandate. In its short two-year life, member governments have reduced trade tariffs between member states 90 percent as a first step to establishing an economic bloc that can “negotiate and trade with other economies as a unified group.” The group has also helped consolidate the stock markets of Chile, Columbia, and Peru into the Latin American Integrated Market (MILA) to allow cross border trading; and the Mexican stock market is in the process of negotiating its entry. The four -- soon to be five -- member states have also achieved meaningful agreements on migration, and have attracted observers from countries including the Dominican Republic, Ecuador, El Salvador, Guatemala, Honduras, Panama, Paraguay, Uruguay, and the United States.

The sentiment is understandable. The question is whether the Pacific Alliance will require other members to accede to its standards or whether, in the name of solidarity for countries like Brazil that have shown little interest in making the commitments necessary for meaningful cooperation, it will dilute them. If the latter turns out to be the case, the Pacific Alliance will likely end up no better than CELAC and UNASUR -- a well-intentioned group that quietly enables the erosion of international law, human rights, and democratic norms.

This article was originally published on ForeignAffairs.com.