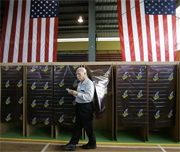 A tight race for the Democratic nomination brought Puerto Rico's June 1 primary into the national spotlight as never before. The vote on the “Isla Bonita” gave the sagging Clinton campaign a boost a day after the Democratic Party's decision to seat Michigan and Florida delegates–but only as half votes. Senator Hillary Clinton won by a 2 to 1 margin in the Puerto Rico primary, supporting her claim that she can win the popular vote. Yet the primary results brought Senator Barack Obama closer to the total delegate count he needs to secure the Democratic nomination. At the same time, the primary provided the front runner an opportunity to reach out to Hispanic voters.

At the same time, the primary drew attention to political matters facing the U.S. commonwealth territory, including the fact that islanders can’t vote in the presidential election despite their eligibility to serve in the U.S. armed forces. Columbia University’s Michael Janeway takes a closer look at the Puerto Rico primary in a New York Times op-ed.

Voter turnout was low on the island, which has a population of four million and 2.5 million registered voters. Still, with 55 delegates and 8 super delegates up for grabs, the island commands more than double the combined delegate heft of South Dakota and Montana, the subsequent and last two primary states. Despite that, CNN served as the only major network to cover the primary’s exit-poll results.

But the importance of the vote has not been lost on Democratic candidates. While Clinton’s win won’t break Obama’s majority stake in delegates, a strong show in Puerto Rico could lend credence to her argument that the Democratic race is not over. With that in mind, the New York senator spent three days stumping on the island in hopes of shoring up her double-digit poll lead in Puerto Rico. Her campaign released a cavalcade of ads in English and Spanish, and hit the Puerto Rican pavement with batucada percussionists and loudspeakers pumping reggaetón. Still, as the Economist puts it, the "odds look terrible" for the Clinton campaign.

For Obama, the primary allowed him to sharpen his skills in terms of attracting Hispanic voters, who have largely supported his rival during the primary season. A recent San Francisco Chronicle analysis examines how going after the Democratic-leaning Latino voting bloc could serve as “the Democrats’ best strategy” to win in November’s election. To that end, the Obama campaign aired an ad with their candidate addressing voters in Spanish—the first advertisement in which a presidential candidate speaks directly in that language. Obama also delivered his first major speech outlining his Latin American policy proposals a week before the primary.

Obama’s outreach to the Hispanic voting bloc has focused on setting him up as a contender with presumptive Republican nominee John McCain. According to the Financial Times, Obama and McCain have already launched their race to secure the Latino vote by campaigning in states such as New Mexico, Nevada, Colorado, Utah, and Arizona. (Republicans held their primary contest in Puerto Rico in February with Senator McCain sweeping all 20 delegates).

For Puerto Rico, the Democratic primary stirred up the island’s ongoing dilemma over whether to become the fifty-first American state or remain a territory. Both Obama and Clinton support self-determination for the island, meaning they will leave the decision up the island’s residents. During the candidates’ visits, Puerto Rican veterans complained to both that Puerto Ricans have no right to cast votes in the presidential elections, even though the islanders serve in the U.S. military. In an op-ed for the Washington Times, Puerto Rican official Flavio Cumpiano writes about the crossroads of the Puerto Rican political status. He also highlights Puerto Rico as a research and development powerhouse, with plenty of room to expand its high-tech and pharmaceutical industries for full integration into the global market.

Yet Puerto Rico faces a number of challenges, including a stagnant economy, high food and fuel prices, and social inequality. The latest issue of ReVista, the magazine published by Harvard University’s David Rockefeller Center for Latin American Studies, explores these themes and offers a series of articles examining the roots of inequality, weak labor markets, and low standards of education in Puerto Rico’s economic dependency on the United States.

Read an AS/COA interview with Susan Minushkin on the role of the Latino vote in the upcoming presidential election.