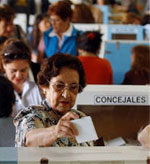 Updated December 14 - For the first time since the end of the Pinochet dictatorship, a conservative won Chile's elections. Attempts by the ruling-coalition candidate Eduardo Frei to link the winner Sebastian Piñera to the defunct general appear to have backfired. Still, though Piñera, a wealthy businessman, garnered over 44 percent of the vote against ex-President Frei's 30 percent, he failed to win the necessary 50 percent to avoid a runoff. An independent candidate played a central role in the loss by the governing Concertacion coalition; Marco Enríquez-Ominami, who defected from the Concertación after his candidacy was rejected, won 20 percent of the vote. With a month until the January 17 second round, the coalition must repair rifts if Frei hopes to have a chance of beating frontrunner Piñera.

As an independent newcomer, Enríquez-Ominami—also known as “ME-O”—turned a humdrum presidential race between political old-timers into a dynamic three-way competition featuring an intriguing alternative for the presidency. The 36-year-old attempted to attract young voters by calling for a more inclusive democracy that boosts political participation by younger generations. He proposed, among other initiatives, to lower the voting age in Chile to 16. Apparently, his appeal only ran so deep. Only 9.2 percent of Chileans aged 18 to 29 registered to vote in Sunday's election.

Still, Enríquez-Ominami's ability to pull in a fifth of the votes signaled a rejection of politics-as-usual as Frei's attempts to signal that a vote for Piñera symbolized a vote for Pinochet fell flat. As Bloggings by Boz writes, "The political coalition that formed to defeat a dictatorship can't fight Pinochet forever." A Business News Americas op-ed noted before the election that “ME-O appears to be taking votes from Frei rather than Piñera, as the latter's standing in the polls is pretty much what the opposition would expect at this stage, whoever their candidate was, while the center-left vote is split.” Whether Frei can mend that divide in the next month remains to be seen.

Either Piñera or Frei would likely maintain many of the fiscal policies that have turned Chile’s economy into one of the most stable in Latin America. But Piñera, a billionaire and part owner of LAN airlines who lost a 2006 presidential runoff, suggests the private sector should play a greater role in stimulating economic growth and generating new jobs. A Piñera victory means his government will need to build on impressive Concertación achievements. With solid economic growth and several free-trade agreements under its belt, Chile has seen a decline in poverty, improved health services, and significant legal reforms. Chile will also win admittance into the Organization for Economic Cooperation and Development (OECD) on December 15, making it the second Latin American country in the OECD after Mexico. Current Chilean President Michelle Bachelet maintains a 77 percent approval rating. After nearly 20 years of the coalition’s governance, Chile is regarded as an economic superstar, guided by strong fiscal policies and attracting foreign investment to fund mining, energy, and other sectors. However, the country still faces high income inequality, education gaps, and social tensions sparked by territorial demands made by the Mapuche Indians, which led to the death of an indigenous activist at the hands of the police in August.