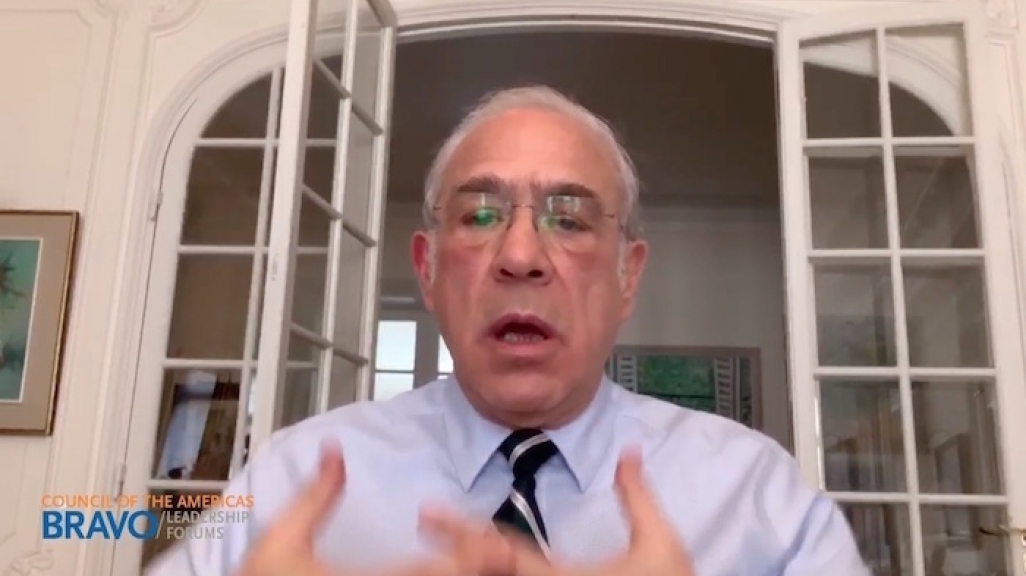 The secretary general of the OECD discussed the social and economic consequences of COVID-19, with an eye on Latin America.

June 18, 2020 — Angel Gurría, secretary general of the Organization for Economic Cooperation and Development (OECD), participated Thursday in Council of the Americas’ (COA) inaugural BRAVO Leadership Conversation of the new virtual series, Leadership and Transformation in Times of Crisis. In a dynamic conversation with AS/COA President and CEO Susan Segal, Gurría discussed the social and economic consequences of COVID-19, with an eye on Latin America, which is now the global epicenter of the pandemic.

Gurría discussed some of the initiatives the OECD has taken to contribute to the global effort, highlighting their coronavirus digital hub, which contains over one hundred policy briefs, a policy tracker, and papers on everything from health policy to education to tax law and more.

Gurría said that the problem with Latin America’s economy is that the region was already coming out of a “bad” 2019 when the pandemic hit. “It’s not that the problems have changed,” he said, but that “the problems have become much more obvious, much more evident, much more urgent—even, I would say, emergent because we never had a situation where people could not go out and work. We never had a situation where people had to choose between the virus and hunger.”

Economic unrest begets social unrest, said Gurría. “People are angry, they are pissed off. They are not happy with the status quo. Trade tensions cause uncertainty. Uncertainty is the enemy of investment. Investment is the seed of tomorrow’s growth,” he said, and the social unrest ultimately “puts democracy at risk.” Fueling the unrest in Latin America in particular, he said, is income inequality. Latin America isn’t the poorest region in the world, he said, but it is the most unequal. “If anything, what we’re seeing is a widening of this chasm that exists, which is ethically and morally wrong. It’s economically dysfunctional and politically explosive and very dangerous.”

As a past BRAVO Business Awards honoree (2017 Legacy Award), Gurría also talked about the importance of leadership in times of crisis: “We cannot wish for a better post-COVID world; we’re going to have to build it.” When asked if he could give one piece of advice, he said that cooperation and “mutually reinforcing measures and exchange of experiences” are key.

Gurría has held the position of secretary general at the OECD since 2006. Prior to the OECD, Gurría was minister of foreign affairs and minister of finance and public credit in Mexico during the 1990s.

With the BRAVO Leadership Conversation, COA launches the 2020 COA Symposium and BRAVO Virtual Series: Leadership and Transformation in Times of Crisis to continue to provide access to leadership and to promote collaboration among industry leaders at a time when it is more necessary than ever. The series will address the unprecedented challenges brought globally and regionally by the pandemic, as well as the various responses to the crisis across sectors and stakeholders.

Watch the next BRAVO Leadership Conversation with Softtek’s Blanca Treviño on July 9.

The BRAVO Virtual Series is sponsored by:

Bank of America, The AES Corporation, and SAP.