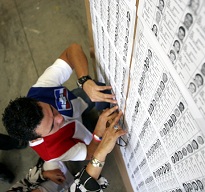 Salvadoran voters head to the polls on March 11 to elect legislators and mayors. (AP Photo)

On March 11, El Salvador will hold elections for the country’s legislature and mayors in a test for the former guerrilla-group-turned-governing-party, the Farabundo Marti National Liberation Front (FMLN). In 2009, the FMLN won the presidency with the victory of President Mauricio Funes, as well as 35 of 84 congressional seats. This ended the two-decade-long rule of the conservative Nationalist Republican Alliance (ARENA) following the civil war from 1980 to 1992. In the last election, the FMLN also won 96 out of 262 municipalities, but lost the vital mayoralty of San Salvador, which ARENA hopes to keep this year. In this election, the FMLN hopes to win at least 43 seats in order to have a congressional supermajority, but faces fractures within the party, as well as discontent among its base. The country’s legislative agenda could be at stake as the FMLN tries to push through reforms—and ARENA hopes to stop them.

A February poll by the Central American University found a near tie between the two parties. The FMLN has 27.8 percent of vote intention for legislative seats while ARENA has 26.4 percent. Similarly, the FMLN holds a narrow poll lead in municipal votes, with 28.6 percent compared to ARENA’s 28.2 percent. With additional seats in Congress, ARENA could potentially block much of Funes’ legislative agenda. But rifts within the FMLN could also be an issue. FMLN hard-liners view Funes as too centrist and want more dramatic reforms. But dissatisfied voters may be wary of a more radical approach from the FMLN, especially in its attempts to reform the constitution.

One of the FMLN’s most controversial proposals involves allowing for referendums, plebiscites, and other similar mechanisms, which the party says would help expand participative democracy. These referenda would allow voters to decide on a wide variety of issues, from evaluating the performance of elected officials to agreeing on privatizing airports. Given its desire to change the function of democratic participation, the party also expressed interest in altering Article 248 of the Artículos Pétreos, which determines that no one can change the “form and system of government.” The proposal faces opposition from 58 percent of Salvadorans, who fear changing this element of the Constitution could open the door to undemocratic reforms. In January, the party also proposed the creation of a constitutional court, which would be the highest court in the country—above the current Supreme Court—and would be used to guarantee citizens’ “constitutional rights.”

Newly implemented voting reforms also present a challenge. Instead of choosing a single party, voters will pick individual candidates for the first time, though they must be from the same party. The ballot will have photos of the candidates, as well as the symbols of the political parties. But with little effort from the government to inform voters of the changes, both parties took different tactics: ARENA focused on voting for individual candidates, while the FMLN campaigned with an emphasis on the party symbol. Still, party leaders worry that the ballot change could lead to confusion during voting.

Other changes may prove more immediately beneficial. The country will begin a “residential vote,” allowing voters to visit polls in their home towns in 185 of 262 municipalities in the hopes of raising voter participation. In the past, voters were assigned to voting centers based on their last name, which sometimes required traveling long distances in order to cast votes. Moreover, the Supreme Electoral Tribunal will announce voting results during three periods the day of and the day following the election.

Voters concerns center on the economy and security. A UN report found that in 2010, the homicide rate reached 66 per 100,000, one of the highest rates in the world. In 2011, the country’s GDP grew by 1.4 percent, compared to 3.3 percent in Guatemala and 3.2 percent in Honduras.