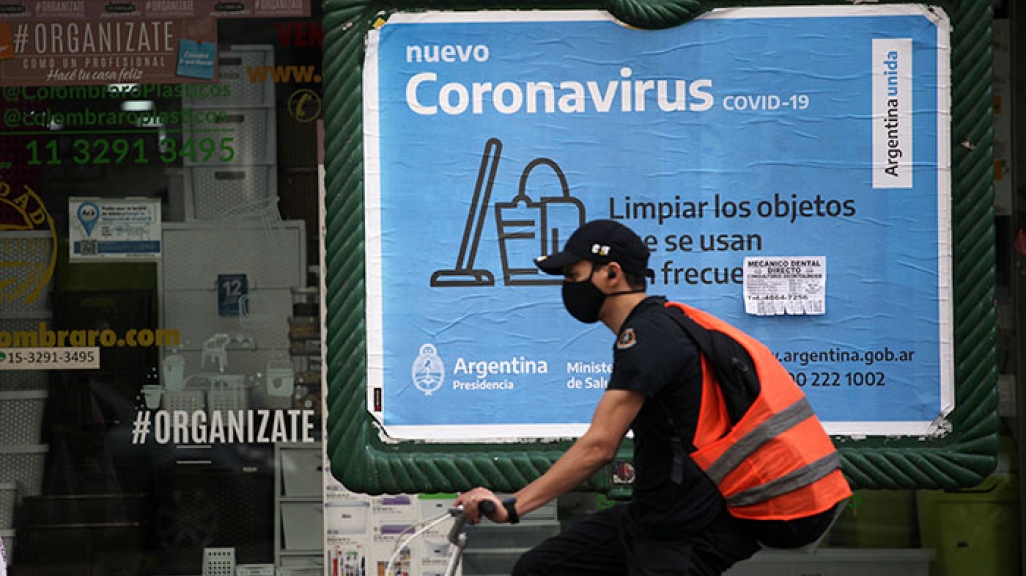 A cyclist in Buenos Aires. (AP)

Argentina was the first Latin American country to have a coronavirus-related death on March 7, then implemented a lockdown on March 20. Like most countries, Argentina was not fully prepared for a pandemic of this proportion, but in the context of a city-planning capacity, authorities in the capital built a strategy by exploring different types of catastrophic events that disrupt the normal functions.

AS/COA Online spoke with Secretary General of the City of Buenos Aires Fernando Straface, who explained how the capital city and greater metropolitan region, including 40 municipalities in the surrounding Buenos Aires province, joined efforts with the federal government to face the challenges brought on by the health crisis.

AS/COA Online: How do you even begin to think about a social distancing strategy of this magnitude, and were there any emergency protocols already in place that served as a starting point?

Fernando Straface: Of course, we were not prepared, as no one in the world was for this kind of pandemic, but in the city-planning-capacity context, we started developing a resilience strategy for the city two years ago. At that moment, we looked at different types of catastrophic events that could disrupt the normal functioning of the city, but a biological threat like this one was not present. We created a model for planning in a mode of crisis in the city, and that was what was applied during this pandemic. A group of people was also put in place for planning the “day after” of the crisis, and among those challenges was the social distancing strategy.

Images and lessons from other cities in the world, especially to ones familiar to Argentines like cities in Spain or Italy, served as demonstrations for us, which made it easier to apply new social norms such as the use of masks in the streets. What also played a major role was the high level of cooperation and coordination between the city and federal government, making a very clear and coherent case to the people that new norms have to be respected. The word of the president and the mayor—both which were important to convey the same message.

AS/COA Online: Given that the coronavirus hit Asia and Europe first, can you tell us more about what cities in other countries that you looked for as a model for the next steps?

Straface: We invested a lot of time in taking ideas from colleagues from other cities—especially in Europe, such as Berlin and Helsinki. We looked closely at the Singaporean experience, and then the case of South Korea and, in each city, you had different aspects to highlight and learn lessons from. In the case of Berlin, and Germany in general, we looked at the health capacity and preparedness to confront the outbreak. In the case of Seoul and Singapore, we were particularly interested in the use of technology as a way to test, isolate, and monitor cases.

In the southern hemisphere, we benefited from the late arrival of the virus and the capacity to learn from places where it hit first.

AS/COA Online: Do you have an example of a specific strategy you might have adopted that worked well in Buenos Aires?

Straface: The policy for isolating the repatriated proved to be successful. The people coming home from trips from all over the world were isolated in hotels for the quarantine period, without the possibility of returning to their homes. I know this was difficult for people, and not easy to explain to those returning. But at the end of the day it proved successful because when we then tested them, more than 5 percent were positive for COVID-19. Would they have returned home from abroad directly, this would have accelerated the spread of the virus in the city.

It was an early decision, and an important one.

AS/COA Online: You mentioned the important relationship between the city and federal government. How is the city, given it’s the area with the highest concentration of cases in Argentina, working with the national government?

Straface: In Argentina, the metropolitan area is the main challenge for COVID-19, as you have the federal government, the city of Buenos Aires, and the government of the province of Buenos Aires, plus the 13 municipal governments that belong to the province. It’s an area where the institutional boundaries are not really important for everyday activities, such as people moving from one place to another or access to health services. The metropolitan area has over 14 million people living and commuting every day, and accounts for about 70 percent of all the cases in the country, and from the moment when the national government declared a lockdown, the cooperation between all these local governments increased.

The measures that the City of Buenos Aires has taken so far have been agreed to with the federal government. This interaction gave the measures credibility and enforcement capacity for people and industries.

AS/COA Online: What were the key challenges in the distribution of health equipment?

Straface: The first and most important challenge was to plan accordingly, to have a clear view of how much you are going to need of what, in terms of the health capacity you want to reach before the virus comes to you. In the City, we benefited a lot from early planning. We put together data based on what experts were foreseeing, and we planned in terms of health infrastructure capabilities.

We were then able to engage in a productive dialogue with the province of Buenos Aires regarding the health capacities we would need in the metropolitan area, because the way the health system is organized there is that the City of Buenos Aires has the high-complexity hospitals—those with intensive care units—and a portion of these hospitals would be needed by people coming into the city from the province.

We also had to see where different equipment would come from. For example, in the case of ventilators, in Argentina there are two companies that produce them at a high-level standard, and the federal government centralized the production of these private companies and started to produce according to the capacities each province was expecting to need. This coordination with the national government and the capacity of the national industry made a successful model for distribution.

How is the City is addressing the spread of contagion in the most vulnerable areas?

Straface: Buenos Aires has over 3 million people living and sleeping in the city every day, and around 10 percent—between 250,000 and 300,000 people—live in vulnerable neighborhoods or, as they’re known, villas. We knew at the beginning that would be a special challenge for the spread of the virus because of villas’ high density and the difficulty to make isolation effective in them.

Because of that, we took several measures. A very important one was to create a specific program for the elderly, not only of the city in general but with a specific focus in these vulnerable neighborhoods, and the program provides places such as hotels and other facilities for the elderly to isolate and spend quarantine without risk of contagion. The other measure in place is to provide this population with all the elements to uphold health guidelines and, finally, alongside the federal government, we initiated a program to test, detect, and eventually isolate positive cases in these areas. By testing more we uncovered an increase in the number of positive cases.

The challenge, at least in the beginning, was to get enough tests, seeing as the global market was facing a shortage. In Argentina, the federal government centralizes the PCR tests [tests used to detect antigens] and, thanks to coordination, we are accessing enough tests to apply them to specific city areas, such as the high-risk neighborhoods mentioned before. For other specific groups, like health workers, those who care for the elderly, and security forces, we will receive a large number of rapid tests and those groups mentioned are the priority for such tests, as we want to make sure that frontline health workers have the capacity to be tested periodically.

AS/COA Online: How will public transportation adapt to public health guidelines once social distancing begins to be lifted, given the number of people who depend on it daily?

Straface: The first action regarding public transportation is to change regulations for access to the subway, buses, and trains. We are thinking of how to include more options for transporting people other than those already mentioned.

We are also adding new ways of transport, including bikes—Buenos Aires is a flat city with good weather for most of the year—so we just need to incentivize more people to use them. In that regard, we are continuing the policy of previous years to increase the kilometers dedicated to bike lanes and looking for ways to encourage more people to use bikes, including the public biking system which is free. In addition, we’re doing more public works to give people more space to walk and use scooters. We’re redefining public transportation in the city not only for the present, but to gain new ways of mobility in the future.

AS/COA Online: What communication strategies has the city government implemented since the pandemic hit in a big way?

Straface: One of the positive externalities of the pandemic was people’s increased attention to information from public servants. People want to know the official guidelines of what to do. The mayor and city health minister put in place press conferences every week, sometimes twice weekly, and this became a norm in the city government’s communication capacity.

At the same time, usually every two weeks, the city mayor and president give out official news together, which helps people accept the measures we put in place. I have to say also, that the press conferences given by Governor Andrew Cuomo in the state of New York were a model for our communication strategy.

AS/COA Online: What are some of the first steps being considered to reactivate the economy?

Straface: Well, in order to reactivate the economy, the first parameter we’re following is the speed of the virus’ expansion. The priority of course was to flatten the curve, and we achieved that with the implementation of quarantine at both the federal and city level. However, we did a gradual reopening of some activities such as small neighborhood businesses, and specific activities that involve a low density of people. We have to couple that with strict social distancing norms for reopened businesses, such as having people wearing masks in public. The response from the people in Buenos Aires and business owners was very successful because we all operated under these new norms and a majority of people respect them.

Of course, in the near future, we will monitor the impact of that reopening along with the level of expansion of the virus week by week. Monitoring health parameters will be most important.