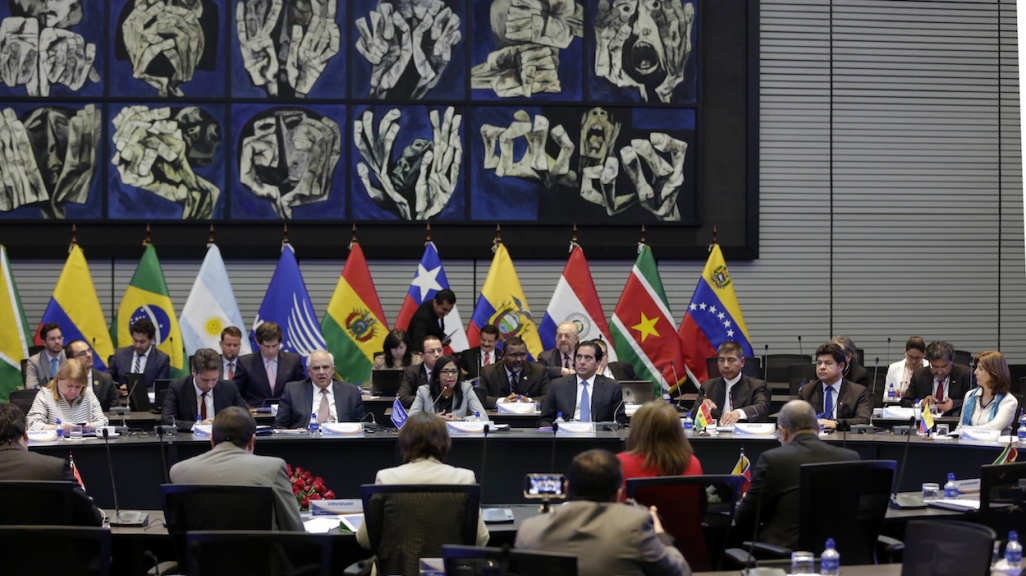 Explainer: What Is UNASUR?

The Union of South American Nations is an intergovernmental body modeled after the European Union. Known as UNASUR, the group acts as a forum for interaction between member-country leaders and also serves as a platform for interregional trade promotion. World Bank figures for 2011 show that the group’s total GDP is worth more than $4.1 trillion. Collectively, the regional bloc forms the world’s fourth largest economy after the United States, China, and Japan. At the November 30, 2012 annual executive-level meeting in Peru, presidents from member countries will focus on social inclusion.

UNASUR was conceived in an agreement dating back to 2004 that sought to promote regional integration by bringing together members of Mercosur and the Andean Community of Nations. In May 2008, leaders from 12 South American countries inked the Constitutive Treaty to create UNASUR with the goal of enhancing regional economic and political integration. When Uruguay became the ninth member to ratify the charter in December 2010, the accord gained the necessary votes to give UNASUR legal status. The treaty subsequently went into effect in March 2011 during a meeting at the group’s headquarters in Quito, Ecuador.

Although UNASUR had looked to the European Union as a model for creating a common currency and central bank, its members shelved such proposals in the summer of 2011. During its tenure, the group has helped mediate conflicts between member countries, aided in disaster response, and fostered collaboration on collective defense and development projects. The group’s treaty explains that UNASUR was founded out of member countries’ “determination to build a South American identity and citizenship and to develop an integrated regional space.”

The group was formed by incorporating the members of two preexisting trade unions—Mercosur and the Andean Community of Nations.

Member heads of state elect a secretary general, who serves a two-year term as the body’s leader. Argentina’s former president, Nestor Kirchner, entered office as UNASUR’s first secretary general in May 2010 and served until his death in October 2010. Alí Rodriguez, a former Venezuelan minister, serves as UNASUR’s current secretary general; his term ends in June 2014. UNASUR’s secretary general helps the group’s sections carry out their duties, acts as the secretary at UNASUR meetings, prepares and presents an annual report, and coordinates with other regional multinational groups in order to carry out UNASUR’s objectives.

UNASUR also has a president pro-tempore who serves a one-year term, presides over UNASUR meetings, and represents the organization at international events. The right to designate the president pro-tempore passes from one member country to the next on a rotating basis that relies on the alphabetical order of countries names. Peru’s President Ollanta Humala serves as the current president pro-tempore of UNASUR. His term ends in June 2013.

UNASUR has three committees that, along with the secretary-general, form the four main organs of the group:

UNASUR also oversees the South American Defense Council, a group that includes the defense ministers from the bloc’s member countries. The council, which was established in December 2008, holds meetings on an annual basis, discussing regional defense policies and coordinating strategies. The country holding UNASUR’s pro-tempore presidency appoints the president of the Defense Council.

In addition to the Defense Council, UNASUR has also appointed a group of minister-level committees that deal with issues including health, social development, infrastructure, education, drugs, economics, and energy.

In June 2012 UNASUR created an Electoral Council that is composed of four representatives from each member country. The council is tasked with visiting countries before elections, communicating with candidates, parties, and monitoring the election process. In October 2012, UNASUR sent the Electoral Council to monitor the presidential election in Venezuela.

South American leaders signed an agreement in 2009 to create the Bank of the South, a development bank advocated by Venezuelan President Hugo Chávez. The bank, which would be based in Caracas, could eventually finance economic development projects in UNASUR member states. In April 2012, Argentina, Bolivia, Ecuador, Uruguay, and Venezuela ratified the bank’s creation. In June 2012, UNASUR’s secretary general said the institution would move forward with a regional program of industrialization and infrastructure construction projects. A 2010 Americas Quarterly article reported that Argentina, Brazil, and Venezuela pledged to donate $6 billion dollars, making up the bulk of the bank’s total initial proposed budget of $7 billion. Some observers have expressed doubts about the bank’s long-term prospects.

In 2008, UNASUR members proposed the creation of a South American parliament with headquarters in Bolivia. UNASUR’s member states have not yet acted to institutionalize the parliament as a formal organ in the group’s structure. Nor have the headquarters for the proposed parliament been built.

So far, UNASUR has served mainly as a public forum for leaders from member states. Although UNASUR countries have made a number of ambitious proposals for regional integration, some observers say that the group has not yet successfully converted projections into projects. João Augusto de Castro Neves, a Brazil analyst at the Eurasia Group, said that in the short term UNASUR’s institutionalization “will be very slow and incremental” but that the group will “remain a forum for dialogue in the foreseeable future.”

Thus far, UNASUR has supported diplomatic resolution. The group mediated the Andean border crisis, a tense diplomatic dispute between Colombia and its neighbors Ecuador and Venezuela in 2008 that came after Colombian forces launched an attack on a FARC camp in Ecuadoran territory. Following the resolution of the crisis, The New York Times reported that “the biggest winner appears to have been the region itself, which resolved its own dispute without outside help and without violence.” The group played a role in resolving an ongoing diplomatic rift between Colombia and Venezuela in 2010.

Also in 2010, UNASUR member countries signed an addendum to their original bylaws to strengthen the emphasis the group places on preserving and protecting democratic institutions within member countries. The protocol states that "in the case of a rupture or threat of a rupture in the democratic order" within any UNASUR member country, UNASUR's senior committees have the right to "suspend the right of participating in the...organs of UNASUR." On a number of occasions UNASUR has acted to condemn what its members view as undemocratic moves in Latin American countries, such as the 2009 coup in Honduras and the controversial impeachment of Paraguayan President Fernando Lugo in 2012.

However, UNASUR’s halting progress on proposed initiatives—ranging from the Bank of the South to establishment of a parliament—has observers questioning the body’s efficacy. “For as much as UNASUR aspires to be a multilateral institution, more than four years after its founding it has failed to produce any legal, normative basis or institutional structure,” says AS/COA Senior Director of Policy Christopher Sabatini. “Without those diplomatic necessities, UNASUR risks becoming just a roving series of summits and high-minded declarations, with little capacity to follow through on them on the ground.” Internal ideological differences may serve as an obstacle to moving forward; Eurasia Group’s Castro Neves points to growing divisions between the region’s open economies and more protectionist ones.

Additionally, the group’s ability to cooperate is affected by the disproportionate size of Brazil’s economy, which accounts for about 60 percent of UNASUR’s total economic output. World Bank data shows that Brazil, the country with the strongest internal market in Latin America, is also the least trade-dependent economy in UNASUR. In 2011, Brazil’s exports accounted for less than 12 percent of GDP, less than half of the average rate of the Spanish-speaking countries in South America. 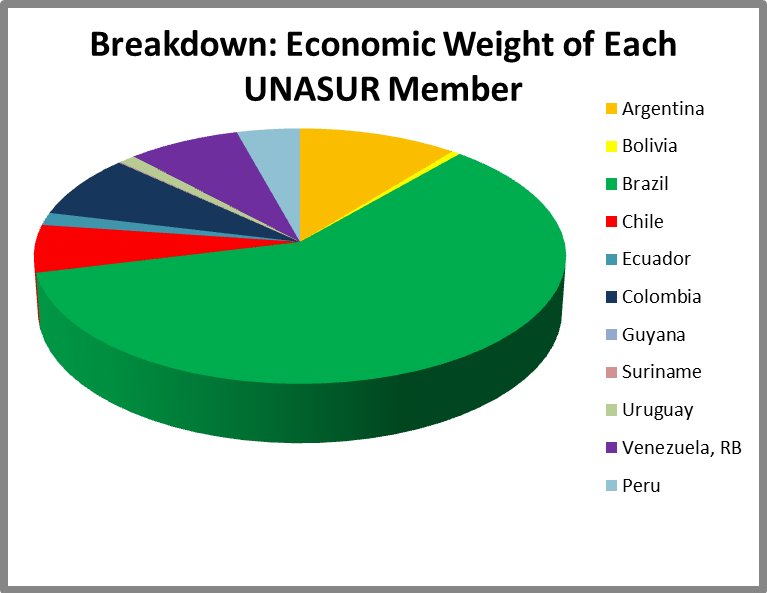 Victoria Murillo, a political scientist who researches economic trends in Latin America and teaches at Columbia University’s School for International and Public Affairs, told AS/COA Online, “Brazil to UNASUR is like Germany to the EU. Success will depend on member countries’ willingness to accept Brazil as a leader.”