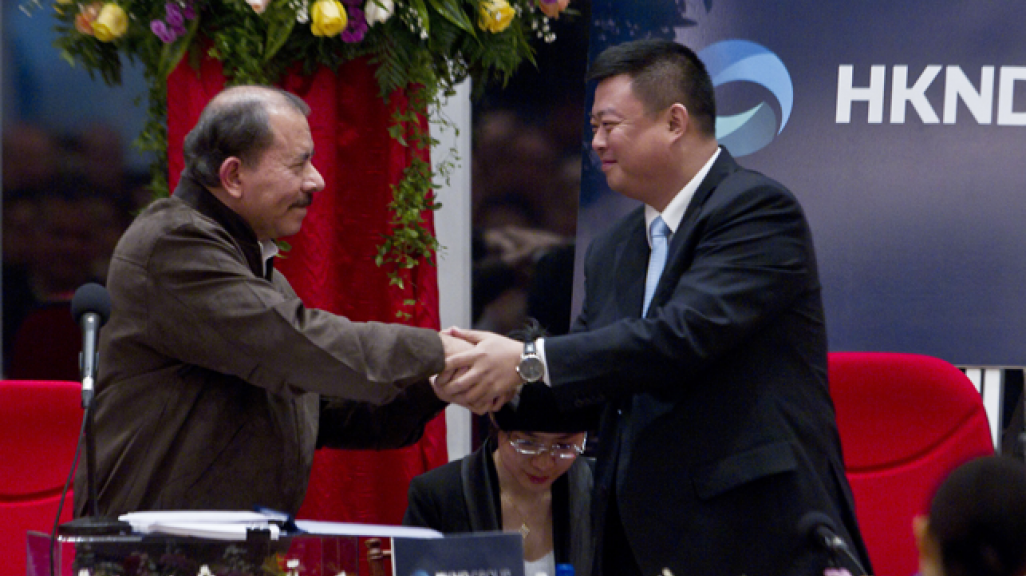 The historic effort proposes a path to economic transformation, but questions linger about the project's funding and impact.

On December 22, a private Chinese firm broke ground on a shipping canal in Nicaragua that aims to connect the Pacific and Atlantic Oceans and could challenge the dominance of Panama's canal a century after its opening. Nicaraguan President Daniel Ortega says the project, officially dubbed the “Nicaragua Interoceanic Grand Canal,” offers a way for his country to ascend from poverty and double its rate of economic growth. But the project's opponents say the undertaking lacks transparency and planning when it comes to how it could affect Nicaragua's economy, environment, and society.

How long has the canal been in the making?

The aspiration for an inter-oceanic canal in Nicaragua dates back to colonial administrations. The Spanish newspaper El País puts the number of previous attempts at 72. The United States originally favored Nicaragua over Panama for a canal, but ultimately chose the latter, partially because of the former's high levels of volcanic activity. Still, in 1914—the year it inaugurated the Panama Canal—the United States paid Nicaragua $3 million dollars to acquire the sole rights to construct a canal. The agreement, known as the Bryan-Chamorro Treaty, put dreams of a Nicaragua canal on hold before both countries mutually abolished it in 1970.

Since then, a number of politicians and entrepreneurs have tried to make Nicaragua's canal a reality, with the plan surfacing and stalling in recent administrations. The latest to pursue the goal is Wang Jing, a 42-year-old Chinese billionaire and telecom mogul who is relatively unknown in the West. Wang heads the Hong Kong Nicaragua Development (HKND) Group, a firm founded in October 2012. On June 13, 2013, after only three hours of debate, Nicaragua's single-chamber National Assembly approved a fast-tracked bill granting HKND Group complete rights to build and operate the canal for 50 years, as well as the option to do so for another 50 after that. Preliminary construction began on December 22, 2014.

What is the project's scope?

At a projected cost of $50 billion, the canal would span 172 miles (278 km), running from Punta Gorda on the Caribbean through Lake Nicaragua to the mouth of the Brito River on the Pacific. The canal's developers aim for it to be operational in five years thanks to advances in technology since the construction of the Panama Canal, which was three times shorter but took twice as long to complete.

The canal would not be the only infrastructure built as part of the megaproject. The HKND Group says it will also construct two ports, a free trade zone, a tourism center, an international airport, and several roads required for the canal's construction. Altogether, the developments make up an undertaking that Wang humbly calls the “most important in the history of humanity.”

How will the canal affect the Panama Canal?

Upon its completion, the canal's capacity would be three times that of the current Panama Canal and would outdo its neighbor's even after the former's ongoing upgrade is complete. Because it will be able to serve cargo ships the Panama Canal can’t accommodate—the HKND Group projects that 17 percent of vessels in 2015 will be too large to pass through despite Panama's construction of a third set of locks—the Nicaragua canal's developers are saying their canal will “complement” that of Panama.

Still, the Panama Canal's chief administrator Jorge Luis Quijano said in a December press conference that it was necessary to keep the construction of a Nicaraguan counterpart on the radar.  “The only way it would not affect us is if they did not construct it,” Quijano told reporters. “If they construct the canal…it’s possible that it would likely capture 30 percent of our market.”

What kind of economic impact could the canal have?

The canal's backers say it will provide a needed boost to Nicaragua's economy, which in 2013 grew at a rate of 4.6 percent and in 2014 grew at a slower 4.2 percent, according to World Bank estimates. The government estimates that the canal's development will double economic growth, increasing it to upwards of 10 percent. Nicaragua is the second-poorest country in the Americas after Haiti, with a per capita GDP of $1,856 in 2013, according to CEPAL statistics. A government official told the BBC that the project would double formal employment in the country, and the HKND Group says the canal will directly create 50,000 jobs. However, the company recently confirmed that half of those jobs would go to skilled workers from outside Nicaragua, with a quarter of all workers coming from China.

What is China's role in the project?

Discussions over the geopolitics of the project have featured speculation over the extent to which the Chinese government is using the canal to establish a greater presence in Latin America, where it has increased its trade by 24 times since 2000. A June 2013 Deutsche Welle editorial suggests that the canal may be a play by China to curry favor with Nicaragua, which does not recognize Beijing diplomatically. Nicaragua instead has ties with Taiwan, and a warmer relationship with China could prompt a shift in allegiance.

Wang, however, has denied any association with Beijing. In a press conference on January 7, China's Foreign Ministry Spokesperson Hong Lei also refuted rumors that the government had played a unspoken role in the canal's planning. "This project is the action of the relevant company's own initiative,” Hong said. “The Chinese government has not been involved.”

Why is the canal a source of controversy?

Controversy over the project initially began when Nicaragua's National Assembly approved the HKND Group’s contract without any form of public referendum. Concern also arose about the unknown effect the canal would have on Lake Nicaragua, the country's largest source of freshwater. The lake will have to be dredged in order to meet the canal's depth requirements, which a panel of scientists from across the Americas say will release sediments into the lake, increasing oxygen levels and consequentially lowering the lake’s biodiversity while producing bacteria that would render the water undrinkable. Critics also include farmers who live along the planned route and have staged protests calling for the Chinese to leave Nicaragua. The New Yorker reports that Ortega granted Wang the ability to strip groups of indigenous Nicaraguans and black creoles of land that was guaranteed to them in the country's 1987 Constitution.

There is additionally a lack of transparency over how the HKND Group intends to pay for the project. Reuters reported in December 2014 that the group had only identified $200 million in funding, adding to speculation that the Chinese government may be planning to pay for it. “If the canal goes ahead, it will be because the Chinese government wants it to, and the financing will come from China's various state firms,” Arturo Cruz, a professor at Managua’s INCAE business school and a former ambassador to the U.S., told the press agency. On December 23, Wang announced that his group was preparing to launch an initial public offering to raise funds for the canal.

Also fueling controversy are reports that Nicaraguan officials may be targeting journalists covering the canal’s construction. On December 21, the day before the canal’s groundbreaking ceremony, three Spanish journalists were detained for an hour and a half before being released without explanation. The same day, a Belgian journalist was reportedly detained and interrogated before being deported back to Europe.

How has the canal made ripples internationally?

While some have described the canal as a challenge to the U.S. presence in Central America, Washington has neither endorsed nor opposed the project. It has, however, requested greater transparency during the canal’s development. On January 6, the U.S. embassy in Managua called for the release of documents clarifying the project's impacts. “The embassy is worried by the lack of information and transparency that has existed, and continues to exist, over many of the important aspects of this project,” the embassy said in a statement.

Meanwhile, multiple media outlets reported in 2014 that an agreement between Nicaragua and Russia would give the latter a role in the canal’s construction, providing security for contractors. However, a canal spokesperson denied such claims, which surfaced amid a growing collaborative relationship between Russian President Vladimir Putin and Ortega.

More will be known on how Latin American leaders feel about the canal in coming weeks. Promoting the project will be a key point of Ortega's agenda when he travels to Costa Rica for the third Community of Latin American and Caribbean States summit at the end of January.

Some of the region's presidents have strengthened ties with China during the pandemic, while others have sought to distance themselves. AQ tracks how eight governments have managed their relationships