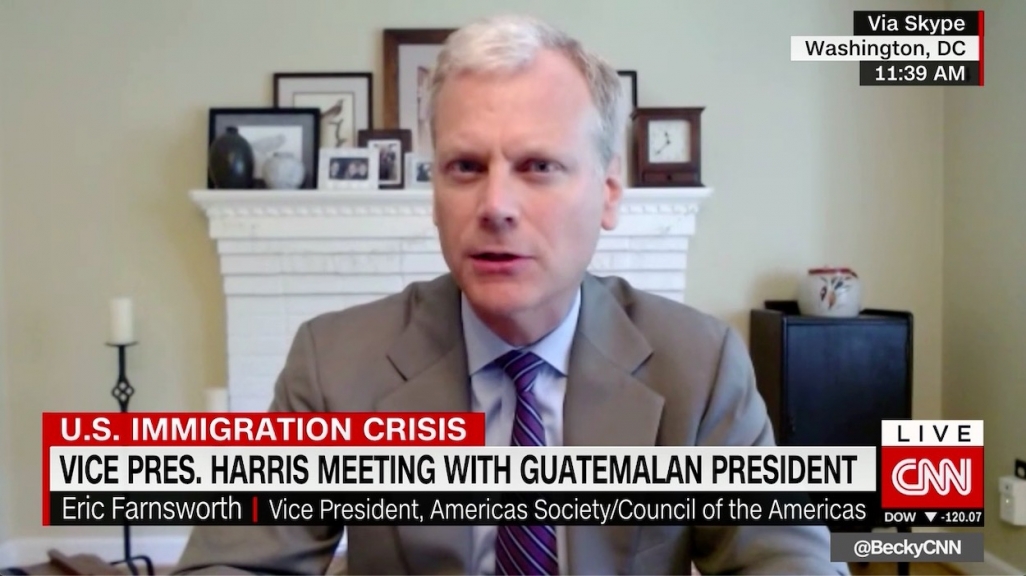 Eric Farnsworth on CNN: Migration from Central America to the United States

"I don't think there are necessarily solutions to be had, rather the management of a difficult issue," said the AS/COA vice president.

Eric Farnsworth, a Council of the Americas vice president, spoke to Isa Soares on CNN's Connect the World about U.S. Vice President Kamala Harris' visit to Central America and migration from the region to the United States.

"These are terribly complicated issues," said Farnsworth. "It's important that the government is giving importance to these issues and sending the vice president into really a complicated situation without necessarily a hope of an immediate solution here. She's not coming with solutions because I don't think there are necessarily solutions to be had, rather the management of a difficult issue."

Farnsworth emphasized that the need for better healthcare, better education, and better security are problems throughout the Northern Triangle and parts of Central America. "The real answer is the United States cannot do this. This has to be coming from the region itself," said Farnsworth. "We can offer guidance and advice and money, and we can show, frankly, that we won't accept certain behaviors in the context of corrupt activities or things that really go against democratic principles."

When asked about how to begin change within Central American governments, Farnsworth replied, "Frankly, we have to have a better sense of creating conditions that will draw investment, business conditions so that people will want to invest in these countries to create the jobs that will compel some of the population to remain in their own countries. It's also about providing conditions that will provide incentives for people, frankly, to remain in their homeland, which most people indeed probably want to do in the first place."