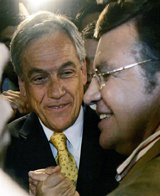 Student protests have shaken Chile since April. In response, President Sebastián Piñera proposed the Great National Education Agreement this week. The cornerstone of the proposal is a $4 billion fund to increase the availability of university scholarships and ease interest rates on government-backed student loans. Citing Piñera administration officials, La Tercera reports that the total investment may amount to as much as $10 billion—a hefty sum, considering Chile’s total federal budget for education amounts to $11.5 billion annually. Piñera’s proposal also includes the creation of a national university index, the legalization of for-profit colleges, and a reworking of the terms of some 110,000 delinquent student loans. “In this way, we’ll advance toward a society of true equality of opportunity,” Piñera said of the plan.

But Piñera’s proposal failed to satisfy student protesters, who say the education system is plagued by structural inequities that the president’s plan will not fix. At a press conference Wednesday morning, student leaders criticized Piñera’s plan, saying it opened up the possibility of running universities for a profit and did not address their demands for greater federal control over the school system. Camila Vallejo, president the University of Chile Student Federation, said the protests would continue and that students across the country would strike on July 14.

Education reform presents one of Chile’s thorniest political problems. Originally run by the federal government, the public school system was decentralized and partially privatized in 1981, during the military dictatorship of Augusto Pinochet. Critics of the Pinochet-era changes charge that the reforms led to increased inequality among students, with richer students attending private schools while poorer students remained in the public system. A similar conflict characterizes debate over reform of Chile’s university system, where students say high tuition rates at private universities push them and their families to go into debt to finance their educations. Piñera’s otherwise popular predecessor, Michelle Bachelet, also faced mass student protests in 2006, prompting her to spearhead the creation of a Superintendency of Education to oversee and inspect the system and a General Education Law.

The reforms did not go far enough for many students, however. A new series of protests began in April, resulting in the occupation of over 200 schools and universities, weeks of lost classes, and a 3,000-person choreographed performance of Michael Jackson’s “Thriller” designed to drive home the idea that Chile’s education system is dead. On July 1, some 150,000 students, teachers, and sympathizers took to the streets. Their long list of demands includes increased investment in the public education system, year-round bus passes, guaranteed scholarships for lower and middle-class students, and an end to the practice of using standardized test scores as the only measure for entrance into competitive universities. Some of the more extreme elements of the movement want to the state to take over education entirely, eliminating private institutions—a move strongly opposed by Piñera and Education Minister Joaquín Lavín. Lavín will travel to Brazil this weekend to study how the country finances a university system in which private institutions have tripled over the last 10 years.

Students aren’t the only ones upset with Piñera. Public discontent with the education system is one of the main factors responsible for the center-right president’s slumping popularity. Only 35 percent of Chileans currently approve of Piñera’s performance, according to a recent poll by the Center for Studies of Contemporary Reality—the lowest of any president since the country returned to democracy in 1990 and a far cry from his peak of 63 percent in October 2010, following the rescue of 33 trapped miners. An upcoming strike at the state copper mine, Codelco, and protests against energy projects such as Hydroaysén have also played a role in the downturn of his approval ratings. But Piñera recognizes education as an important part of his strategy to regain the public’s confidence. “The battle for quality education is the mother of all battles,” Piñera said in his speech Tuesday. “We need to win the battle for opportunities, the battle of equality, and the battle for our future.”