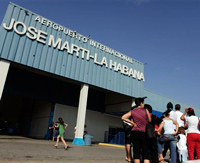 Picture this: in a brief moment of reform, the veil of isolation is lifted over an autocratic island. Cubans are allowed to travel freely to visit relatives, breaking a half-century of lockdown to get a taste of the world outside. Realizing the risks that this whiff of exchange and travel will mean to their control, though, the leaders clamp down, returning their citizens to comfortable dark isolation.

Is this the Castro brothers, Fidel and Raul, who have governed over the longest-standing dictatorship in the hemisphere? No. In this case, it is Cuban-American Congressman Mario Diaz-Balart. The congressman, whose district, the 21st, represents a large segment of Cuban-Americans, last week inserted a provision in the House appropriations bill that would end unlimited travel of Cuban-Americans to the island to visit their families. At of the end of last week, in the midst of the budget negotiations, Congressman Diaz-Balart's motion passed the House Committee on Foreign Relations by a vote of 36 to 6, including the support of 13 Democrats.

In January 2009, the Obama administration lifted a policy put in place by President George W. Bush that had restricted Cuban-Americans to one trip to the island every three years to visit their families. The U.S. diaspora quickly embraced the new-found freedoms to travel. Last year over 400,000 individual trips were made to the island by Cuban-Americans, many bearing gifts such as cell phones, coffee, food, and electronic equipment

—along with information about their lives in the United States. Those trips also provided an economic lifeline to many Cubans living on the island that suffer under food and medical shortages wrought by the perverse, failed economic policies of the Castro regime.

Not surprisingly, the policy change has been popular among Cuban-Americans. In a survey conducted by Bendixen & Associates shortly after President Obama's travel changes were announced, 64 percent of Cuban-Americans nationwide supported unrestricted travel for themselves to the island.

So, the question is, why try to alter a policy that would seem to further a longstanding U.S. foreign policy goal to promote freedom in Cuba that is popular among voters?

Many argue that the flow of Cuban-Americans to the island, and the remittances they send, keep the regime afloat by providing a lifeline of hard currency to the economically-strapped nation. No doubt this is true; in the state-controlled Cuban economy any dollar sent to or spent on the island eventually ends up in the regime's coffers. So, the theory goes, best to starve the state until it gives in.

Leaving aside the moral implications—that in starving the Cuban state you're also starving Cubans, the very people these policies are purported to help

—there is also the strategic implication of greater travel. This asserts that by allowing Cubans on the island to meet with their relatives and gain access to electronic equipment such as cell phones, DVDs or laptops, the policy is actually providing Cubans with the informational and material tools of their own liberation. It is no coincidence that there has never been a people's revolution of the sort we've seen in Egypt in a country under as tight an embargo as the U.S. has held on Cuba since the early 1960s. Nor in any other country has the U.S. imposed as tight a travel ban—not even against South Africa under apartheid when artists and tourists imposed their own ban on travel to protest the regime's inhumane, racist policies.

There is another reason why Cuban-American politicians are pursuing this course of action: they know the sands of Cuba policy are beginning to shift under their feet. A new generation of Cuban-American voters in Florida is coming of political age. Many of them share the goal of freedom in Cuba with their parents and grandparents but—unlike their parents and grandparents—those goals have not been clouded by an all-consuming hatred of the Castro brothers. Today, the risk for many of these politicians is that Cuban-Americans themselves, just like their counterparts on the island, have the freedom to decide whether they travel or not—and in doing so may come to re-evaluate the U.S.' 50-year-old policy toward Cuba. But that should be the decision made by the citizens themselves, not by their leaders—on either side of the Florida straits.