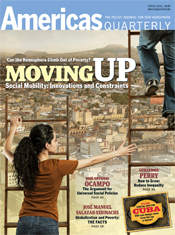 The perennial argument over social policy—universalism versus targeted subsidies to the poor—is once again galvanizing policymakers and scholars across the region. In recent decades, Latin American governments have generally inclined toward limited social assistance programs, but that model is increasingly under attack in a continent where high levels of inequality continue to be endemic. Yet the alternative, a universal welfare system based on the principle of social citizenship—or social rights—is often regarded as having limited applicability in Latin America, where access to formal employment and a solid tax base—key elements of this model—are limited.

It’s time to re-think such assumptions. We need to return to the idea of universalism that inspired social policies around the world in the past. The best “targeting” for the poor is in fact a universal social policy. The targeted programs that have become the policy fashion in the region should be seen not as a substitute but as a complement and, indeed, as an instrument of universalism.

To be sure, social policies based on the principles...

Read the full text of the article.

This article is featured in the Spring 2008 issue of Americas Quarterly which hit newsstands on April 23. Learn more about AQ.

From universal health care to a revival of hemispheric trade talks, it’s time to be bold.

The region’s public sector will grow after the pandemic – and the temptation to undo market-friendly policies will be hard to resist.