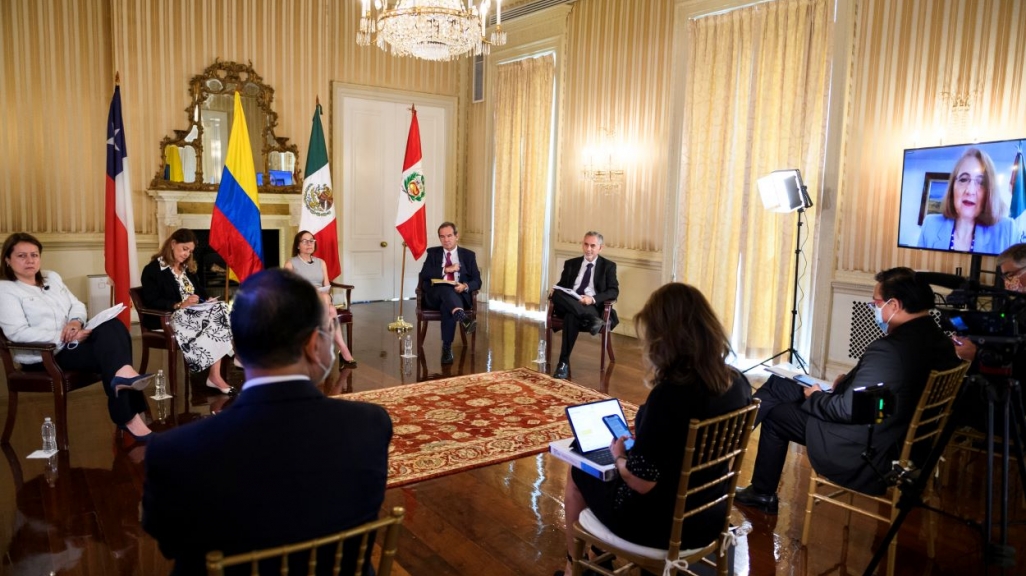 Representatives from Chile, Colombia, Mexico and Perú discussed the challenges of a post-Covid recovery and the benefits of the commercial bloc.

New York, NY, September 22, 2021—Americas Society/Council of the Americas (AS/COA) hosted five authorities from the Pacific Alliance—an integration mechanism formed by Chile, Colombia, Mexico, and Peru—who participated in the panel “A Conversation with the Pacific Alliance.” This discussion forum took place on September 22 in the AS/COA New York building and included the Vice President and Foreign Relations Minister of Colombia Marta Lucía Ramírez; the Minister of Commerce, Industry, and Tourism of Colombia María Ximena Lombana; the Foreign Affairs Minister of Chile Andrés Allamand; the Economy and Finance Minister of Peru Pedro Francke; and the Undersecretary for Foreign Trade of Mexico Luz María de La Mora. Watch the video of the event.

The five leaders discussed the regional bloc's achievements and advancements in environmental sustainability, digitalization, and gender equality in the Pacific Alliance countries to combat the challenges created by the current global outlook and propel economic recovery, as well as the global tendency to the relocation of investment and the benefits this commercial bloc offers as a platform for regional markets coverage.

It has been "a challenge and an honor" to assume the pro tempore presidency of the Pacific Alliance during this complex moment, said the President of Colombia Iván Duque in a video that opened the annual AS/COA event within the UN General Assembly in New York. He highlighted the conclusion of the negotiations in July for a commercial agreement with Singapore, which made it the first Associated State in the Pacific Alliance.

“For the Pacific Alliance countries, the topics of environmental sustainability, the green economy are not things that arose as a consequence of the pandemic. It was something we had been working on. In 2016, there was the Cartagena Declaration for the Pacific Alliance countries to be focused on: how to develop more sustainable, cleaner, and competitive economies,” said Vice President and Foreign Relations Minister Ramírez. “This is a pragmatic, flexible, and very open integration mechanism. We have been dismantling duties, but a difference from other systems of integration is that it’s not the most important thing. The most important thing is seeing how we identify value chains that can develop from the production of our countries and the transversal element of sustainability is fundamental for all of us.”

The Minister of Commerce, Industry and Tourism of Colombia María Ximena Lombana said that, for the Pacific Alliance, the creation of a Regional Digital Market becomes a “priority” topic of interest. “The purpose is to generate a harmonious economic space, without cross-border barriers for the electronic interchange of services and products, which incentivizes investment and development of services, applications, and innovations. We have the roadmap that marks the path to follow to propel the digital economy in Chile, Colombia, Mexico, and Peru.”

The panelists highlighted the role of gender equality to promote innovation and sustainability. “The gender inequalities in our economies have been deepened by the effects of the pandemic, which makes more urgent the advancement of women’s economic empowerment and their inclusion in international commerce,” said the Foreign Affairs Minister Andrés Allamand. “That depends, in great part, that we be capable of decidedly dismantling digital gender gaps, the reason for which we reaffirm our commitment to continue strengthening the bloc by means of the development of agreed-upon initiatives recently passed in the Santiago summit. A more inclusive and digital Pacific Alliance strengthens the competitiveness of our countries at a worldwide level.”

From his part, the Economy and Finance Minister of Peru Pedro Francke highlighted the Pacific Alliance’s potential to connect micro, small, and medium-sized enterprises with intra and extra regional global value chains, improving their financing, international services, and technological development. “For Peru, as for all the countries in the Alliance, economic and social reactivation of micro, small, and medium-sized enterprises is a priority,” he said. In addition, he highlighted the importance of advancing the development of the ecosystem of entrepreneurship and innovation in the Pacific Alliance, as well as the need to continue with the efforts to generate scientific and technological knowledge and improve the conditions of our citizens, especially from the most vulnerable populations.

"The regionalization of production of enterprises in the areas most affected by the pandemic represents an opportunity for the Pacific Alliance. We count on the important comparative advantages like that identifies and offer solutions to investment barriers and trade in services, like a portfolio with investment and infrastructure projects in our countries. Likewise, last July, we closed the negotiation process between the Pacific Alliance and Singapore, which will allow us to count on a more accessible tool more for preferential access to the Asia-Pacific region, one of the most competitive regions in the world,” said Undersecretary de la Mora.

The Pacific Alliance is a regional integration mechanism that looks to promote greater growth and competitiveness through free trade. Established in 2011 with a focus on the Asia-Pacific region, the four members–Chile, Colombia, Mexico, and Peru—represent the eighth largest exporter worldwide. The pro tempore presidency of the Pacific Alliance will be held by Colombia from December 2020, through December 2021, when it will be passed on to Mexico.