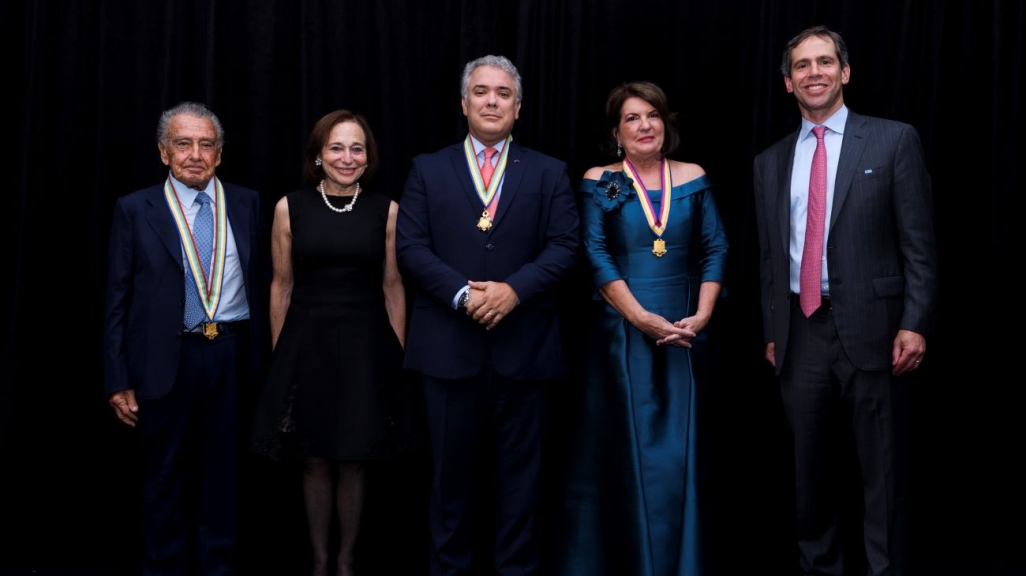 “It is an honor to bestow these awards to such outstanding and inspiring hemispheric leaders,” said AS/COA’s Susan Segal.

A limited group of guests from the world of business, philanthropy, government, diplomacy, and the arts in the Americas attended the Society’s 2021 Fall Party held October 12 in New York City at Tavern on the Green.

“It is an honor to bestow the Americas Society Gold Insigne and Gold Medal to three outstanding and inspiring hemispheric leaders. President Duque is an example for his handling of a major refugee crisis; Pilar Arosemena de Alemán is a leading social entrepreneur in Panama promoting women’s causes in the country and beyond; and Eduardo Eurnekian is recognized for his outstanding entrepreneurship, leadership, and unlimited generosity on social issues. I can’t imagine three more deserving honorees,” said Americas Society/Council of the Americas (AS/COA) President and CEO Susan Segal.

“The Americas Society’s Gold Insigne is given to leaders of democratically elected heads of state from the Western Hemisphere who work to promote greater awareness of the cultural, social, and political realities of the region, and greater understanding among the nations of the Americas,” said AS/COA’s Chairman and AES President and CEO Andrés Gluski. “President Duque represents this in his generosity and leadership with Venezuelan immigrants.”

“Today I invite you all to defend the migrants and defend democracy in Venezuela,” said President Duque upon receiving the award. “It was not easy [to promote a temporary protection status] because there’s always the possibility of someone trying to plant the seed of xenophobia or indifference. This award is for the Colombian people, because they have recognized that this is a must. This award only motivates me to do much more on this subject. We all need to raise our voices against the dictatorship of Nicolás Maduro. Protecting migrants is a matter of humanity.”

Arosemena de Alemán oversaw the construction and the 2014 opening of the groundbreaking biodiversity museum BioMuseo, the first Latin American museum designed by architect Frank O. Gehry. “I decided to accept this Gold Medal to honor, first and foremost my country, for having been able to understand its ancestral roots as the original hub of the Americas and to prove that we can also be recognized by our positive deeds,” said de Alemán after receiving the award.

Upon receiving the award, Eurnekian said: “This Americas Society Gold Medal inspires me to continue promoting the values I share with this distinguished organization: social and economic development, open markets, rule of law, and democracy throughout the Western Hemisphere.”


Iván Duque was elected president of Colombia in 2018. At the onset of the Venezuelan migrant crisis, President Duque startled the world by adopting inclusive and humanitarian policies towards 1.8 million refugees arriving in his country. His public career started before he graduated college, first as a consultant at the Andean Development Corporation and as an adviser to then Minister of the Treasury Juan Manuel Santos. From 2001 to 2013, he served his country at the Inter-American Development Bank where he was also Head of the Culture, Creativity and Solidarity Division, working on social innovation, entrepreneurship, youth, and creative economies. President Duque is a prolific writer, having published several books and newspaper columns. During his term as senator from 2014 until the presidential campaign of 2018, Duque was chosen as the 2016 most outstanding leader of the country by Semana magazine and the Colombia Leader Foundation, and also chosen as best senator in 2017 by his peers in Congress in 2017. He was recently honored by the Rainforest Trust for his leadership in environmental conservation and received several awards from organizations such as the World Health Organization and others for his policies on health and towards Venezuelan migrants.

Maria Del Pilar Arosemena de Alemán served as Panama’s ambassador to France between 2015 and 2017. As Executive President of Fundación Amador, Maria Del Pilar oversaw the construction and the opening in 2014 of the biodiversity museum BioMuseo, the first Latin American museum designed by architect Frank O. Gehry. A former president of the Panama Stock exchange, earlier in her career Arosemena de Alemán was also Professor of Finance at Universidad Santa Maria La Antigua and held several executive posts in banking and finance. Arosemena de Alemán is a member of the board of Trustees of Private Sector Council in Favor of the Educational System as well as supporting several other organizations as a board member, while serving as director and vice president of Aropecuaria y Arobienes, a family business operating cattle farms and developing low-income housing in Panama. Arosemena de Alemán was awarded the Best Financial Executive of 1999 by the Members of the Stock Exchange.

Eduardo Eurnekian is the chairman of Corporación America. A philanthropist and entrepreneur, Eurnekian started at the family textile business in Argentina and diversified into media, including some of the largest outlets in the country. By the late 1990s, he had crossed borders forming Corporación America as an international holding operating in multiple sectors in nine countries. As Chairman of the International Raoul Wallenberg Foundation, he honors the legacy of those who helped victims of Nazi persecution. Eurnekian also heads Fundación San Lázaro, contributing to children’s education, from sponsoring a youth orchestra in Argentina to the One Laptop Per Child program in Armenia. Among other affiliations, Eduardo is president of the Advisory Board of the Private Sector Forum of the OAS and a member of the MIT Charter society. His work to create the Argentina Cemetery at Darwin in the Malvinas/Falkland Islands, where 230 heroes of the South Atlantic War are buried, was one of the efforts for which he was recognized with the Order of the British Empire. A recipient of numerous other awards, Eduardo was also nominated Armenia’s National Hero and UN Goodwill Ambassador.