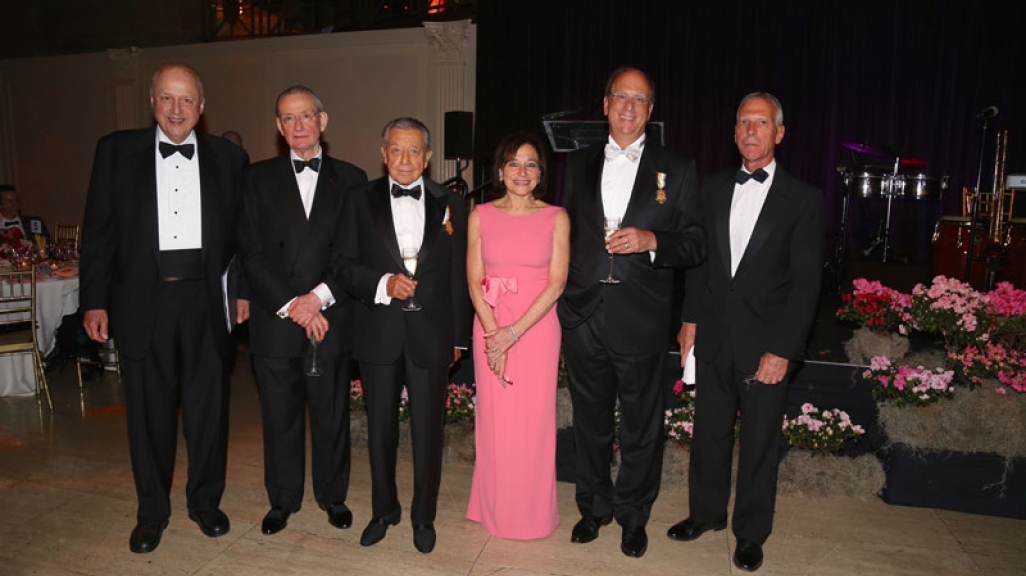 Taking place on the organization's fiftieth anniversary, the event convened over 500 prominent leaders to celebrate the achievements of two extraordinary individuals.

Miguel Alemán Velasco, chair of the Board of Trustees of the Miguel Alemán Foundation and Laurence D. Fink, chairman and chief executive officer of BlackRock, were bestowed with the Gold Medal for their contribution to the promotion of international business, education, gender equality, healthcare, community integration, and the arts. First presented in 1977, the Gold Medal is Americas Society’s highest honor, recognizing the recipients for their long-standing leadership and contributions across multiple disciplines and geographies.

Americas Society/Council of the Americas President and CEO Susan Segal welcomed guests celebrating the success of the gala. Funds raised at the 35th Annual Spring Party will provide support to Americas Society´s cultural and public policy programs for the benefit of a broad audience with a common interest in hemispheric affairs. "As many of you know, the Spring Party is one of our most important annual fundraising events," said Ms. Segal.  "This year, your generous contributions have helped raise over $1.5 million—an impressive achievement. These funds will go a long way toward supporting our mission and activities in the U.S. and abroad."

This much-anticipated event takes place on the fiftieth anniversary of Americas Society. The institution founded by David Rockefeller has played a pivotal role in fostering better relations among the countries of the Western Hemisphere and increasing public awareness of their respective cultures. At the ceremony, the honorees and distinguished guests enjoyed a video presentation with highlights of Americas Society’s remarkable half-century dedicated to education, debate, and dialogue in the Americas.

On presenting the Gold Medal to Miguél Alemán Velasco, Americas Society Chairman Ambassador John D. Negroponte underlined the honoree’s "enterprising spirit" responsible for many successful endeavors in public service and in private pursuits. "Tonight we recognize Miguel’s long and distinguished career of contributions to the growth and development of his beloved home country, Mexico," said Ambassador Negroponte. "The strong leadership he has and continues to bring to his numerous business, political, and social initiatives has inspired positive social change. "

Miguel Alemán’s business acumen is behind the creation of low-cost airline Interjet, the News Division of Telesistema Mexicano S.A., and the Asociación de Mujeres Empresarias—the first branch of the Women’s World Banking Organization in Mexico. A former governor of the state of Veracruz, Mr. Alemán is chairman of the Board of Trustees of the San Carlos Museum and a member of the Board of Trustees of the Dolores Olmedo Museum. He has received many acknowledgements and awards throughout his career, including the Order of the Legion of Honor with the Grade of Official from the French Republic.

In his remarks Miguel Alemán Velasco reflected on a life of service, his business achievements, and longstanding commitment to promoting Mexico on the global stage. "I am honored to receive the Americas Society Gold Medal as the institution celebrates its fiftieth anniversary, and to share this recognition with Larry Fink, a leader who has a very positive outlook on Mexico," said Mr. Alemán. "I am convinced that, by working together, we will contribute to the strengthening and deepening of the relationship between our countries."

Terrence J. Checki, former executive vice president and member of the Management Committee at the Federal Reserve Bank of New York presented the Gold Medal to Laurence D. Fink, drawing attention to the qualities which have made the honoree one of the foremost leaders in the financial services industry and to his outsized impact on a wide range of philanthropic causes. "Tonight, we honor the man whose vision, drive and entrepreneurial spirit have propelled BlackRock’s success and taken it from the germ of an idea to the world’s largest asset management firm," said Mr. Checki. "We are also honoring a statesman with a passion to make the world a better place, and who has backed up that passion with extraordinary generosity and philanthropy."

Named "CEO of the Decade" by Financial News in 2011 and recognized as one of the "World's Best CEOs" by Barron's for nine consecutive years, Mr. Fink has led BlackRock since its founding in 1988. He serves as a member of the Board of Trustees of New York University and is co-chairman of the NYU Langone Medical Center Board of Trustees, and co-chairman of The Partnership for New York City. Mr. Fink also serves on the Boards of The Museum of Modern Art (MoMA), the Council on Foreign Relations, and the New York City charitable organization Robin Hood.

In accepting the Americas Society 2015 Gold Medal Laurence D. Fink articulated the economic and social changes taking place across the Hemisphere. He said Latin America has done important work improving macroeconomic conditions over the past two decades but stressed the region still needs to create conditions for more sustained, deep-rooted economic growth.  "The key question—particularly for Latin America and the Caribbean—is how to transform from a region that weathers crises effectively into one that can make prosperity widespread and sustainable," Mr. Fink said. "Too often, prosperity in the Americas is short-lived—the product of boom and bust cycles.  But the ingredients for sustainable growth are being sowed across the region: formalized economies, infrastructure and education."