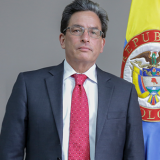 Alberto Carrasquilla Barrera has been minister of finance and public credit since August 2018. He has served as a member of the Board of Directors in several companies. Between 2007 and 2017 he was a partner at Konfigura Capital and Professor of Economics at the Universidad de los Andes. Carrasquilla has held various government posts, including president of the Ministerial Committee for Development between 2005 and 2007; chairman of the Board of Directors and of CAF 2006-2007, and chairman of the Board of Directors of Colombia’s Central Bank from 2003 to 2007; vice minister of finance (2002-2003), dean of the Faculty of Economics of the Universidad de los Andes (2000-2002), independent consultant (1998-2000), lead research economist at the IDB in Washington (1997-1998) and technical manager of the Banco de la República (1993-1997). Carrasquilla is an economist from the Universidad de los Andes, holds a master's degree and has Ph.D studies in economics from the University of Illinois, Urbana Champaign.