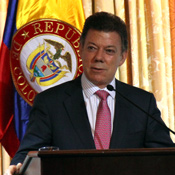 What a difference a decade makes. The successful operation on Friday by Colombia’s armed forces that killed Revolutionary Armed Forces of Colombia (FARC) guerrilla kingpin Guillermo León Sáenz—known by his nom de guerre Alfonso Cano—represents another in a series of victories for President Juan Manuel Santos and his counterinsurgency strategy. Santos’s security policy, built on his predecessors’ Andrés Pastrana and Álvaro Uribe, has put the defeat of the FARC in sight—after the 1990s when the region’s longest running civil war appeared to have reached a stalemate.

While Marxist-inspired guerrilla movements from Guatemala to Argentina put down their arms in the 1980s and 1990s—the result of peace negotiations and democratic transitions—the FARC rebels and the National Liberation Army (ELN) have plagued Colombia for nearly five decades. Both forces claim to represent Colombia’s peasants and at times have managed to control large swaths of territory in Colombia’s rugged rural areas. Though they claim to represent the class struggle, both of the groups long ago became little more than armed criminal syndicates bankrolled by the drug trade in cocaine and other narcotics, illicit commerce in gems, extortion and kidnapping.

But the assassination of Cano, 63, referred to by Santos as “el número uno,” calls into question the long-term viability of the FARC. Shortly after it had happened, Santos’s press office released a statement vowing that the FARC had reached a "breaking point."

Cano had assumed operational control of the FARC in March 2008 after one of its founders—Manuel Marulanda, also known as Tirofijo (Sure Shot)—died of natural causes. That same month, Colombian troops killed Raul Reyes, the chief FARC spokesman and member of its seven-person Secretariat. Then in July of that year, the Colombian army launched a successful mission that rescued Íngrid Betancourt, a senator and presidential candidate at the time of her capture in 2002, and 14 other hostages.

These successive events illustrated the army’s increasing infiltration into FARC operations. And they were the result of Plan Colombia, the U.S.-backed program of financial aid, military training and intelligence cooperation.

Elected last year, Santos, who had been defense minister under President Uribe, came to the office well-prepared for the challenge of taking down a guerrilla movement that was already reeling. Just a month after being sworn in, President Santos orchestrated the assassination of Mono Jojoy—Cano’s right-hand man.

Given these impressive gains, it’s hard to remember where Colombia was just twelve years ago. In 1999, a strong and unified FARC forced then-President Andrés Pastrana, to open negotiations - helped in large part by an international consensus that naively believed that the FARC was still a legitimate political force willing to negotiate in good faith. They weren’t. Pastrana went so far as to cede a 42,000 km2 parcel of territory—roughly the size of Switzerland—to the FARC in a gesture to end the conflict. The FARC quickly turned the “demilitarized zone” into a holding pen for hostages and a staging ground for attacks. In the face of FARC intransigence and ongoing criminal activities, Pastrana called off negotiations in 2002. Now, in its weakened, fragmented state, the FARC has lost its capacity to negotiate concessions.

But for Colombians long terrorized by violence, the FARC remains a dangerous threat. Though now with only roughly 9,000 remaining guerrillas (more than 6,000 fewer than their peak in the late 1990s), the organization is still dangerous. Just last month, FARC’s attacks claimed the lives of 20 Colombian soldiers.

Toward the end of Santos’s address to the Colombian people yesterday, he called the FARC to demobilize, “because as [my administration has] said so many times and as we have proven, you will end up in jail or in a coffin.” A statement from FARC leadership Saturday rejected Santos’s invitation and instead promised further armed resistance. No doubt the FARC will continue to resist. As the last few months have proven, the FARC still has the capacity to kill; but its capacity to achieve anything of its supposed political agenda has ended. The Financial Times notes that longtime FARC soldiers Iván Márquez, Timochenko and Joaquín Gómez are all potential successors to Cano, but it is unclear if his replacement will endorse renewed negotiations or resort to a dead-end path of violence.

This division has Santos holding all the cards in any potential negotiations. At a September 2011 event in New York, Santos commented on the subject, likening negotiations with the FARC and ELN to a door and adding: “The key is in my pocket. And until I see a real willingness of [the rebels] to reach an agreement, there will be no negotiations and we will continue to persevere on our military strategy.”